Yangchuanosaurus was a large carnivorous dinosaur that once terrorized the floodplains of China during the Middle-Late Jurassic period. It was similar in size to its American cousins Allosaurus and Tyrannosaurus rex, another large predator.

At 37 ft (11.2 m) long and more than 2 tons, Yangchuanosaurus was relatively large as a carnivorous dinosaur. It was at the top of the chain of its area, as its prey were the sauropods Mamenchisaurus and Omeisaurus as well as the stegosaurids Chialingosaurus, Tuojiangosaurus and Chungkingosaurus. Its massive tail was almost half its length, as it had a bony knob on its nose and multiple hornlets and ridges, making it slightly resemble Ceratosaurus. It resembled an Allosaurus, although it seemed to be more massive and with a skull that was more rounded and with ridges on the snout area. It is possibly synonymous with it's another close relative Sinraptor. 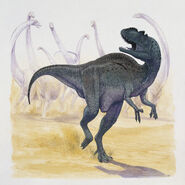 Dinosaur King Yangchuanosaurus
Add a photo to this gallery
Retrieved from "https://dinopedia.fandom.com/wiki/Yangchuanosaurus?oldid=119631"
Community content is available under CC-BY-SA unless otherwise noted.