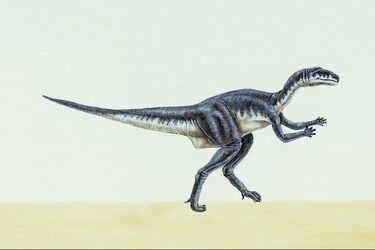 A fast-moving biped, Yandusaurus had four toes on each foot and five fingers on each hand. It was 1 meters (3 feet) to 1.6 meters (5 feet) in length, and around 0.3 meters (1 feet) in height, weighing around 7 kilograms (15 lbs). One species (Y. hongheensis) is known from two nearly complete skeletons. He and Cai (1983) and Paul (1992) identified a second species, Y. multidens, which was later re-assigned to the genus Agilisaurus as A. multidens, and subsequently placed in its own genus, Hexinlusaurus.

Add a photo to this gallery
Retrieved from "https://dinopedia.fandom.com/wiki/Yandusaurus?oldid=206059"
Community content is available under CC-BY-SA unless otherwise noted.