Start a Wiki
Xenosmilus, meaning "alien saber" was a very powerful machairodont estimated at weighing between 230 to 400 kg, and just under 2 m long. This estimate puts Xenosmilus at a similar size to the more famous Smilodon. Similarly to it, this big cat had proportionally large forward canines, although not nearly as large as those of Smilodon. However, the actual classification of Xenosmilus is a subject of confusion. It is similar to both the scimitar-toothed cats as well as the dirk-toothed cats. As such, it has been temporarily placed within the scimitar-toothed cats, although this is prone to change.

Not only also being an ambush hunter, Xenosmilus had a very powerful build, allowing it to easily pin prey to the ground and deliver a lethal blow. This tactic would have worked well against early peccaries, its main food source and an easy kill as shown by remains in the unpreserved stomach.

Xenosmilus is only known from two luckily almost complete specimens, both from what is now Florida. Because of this, it is not known what its range actually was, although it is likely Xenosmilus had come into contact with species such as the early species of Smilodon, dire wolves, the terror bird Titanis, and as mentioned before, peccaries. 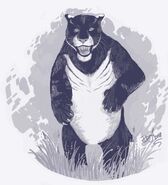 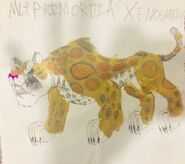 Add a photo to this gallery
Retrieved from "https://dinopedia.fandom.com/wiki/Xenosmilus?oldid=125703"
Community content is available under CC-BY-SA unless otherwise noted.