Xenacanthus was a Xenacanthiform - an ancient freshwater shark-like fish from late Carboniferous time period (300 MYA). Its cartilaginous skeleton was reinforced with calcified blocks and its vertebral arches were completely ossified, but its skull was cartilaginous. The mouth of Xenacanthus was armed with large number of teeth of a trident-like shape, with two large diverging points and a smaller third point between them.

At the back of its head Xenacanthus had a large dentine spike or spine with two rows of minute, file-like teeth behind it. The function of this spike, which appears to be movable, remains unknown - possibly for protection against bigger predators.

The body of Xenacanthus was long and slender, and the caudal part of the spinal column was not as shortened as in case of the bony fishes. The long dorsal fin began at the back of the head, (behind the spike), and stretched as far as its tail.

One of the most interesting features of Xenacanthus is the structure of its pectoral fins, which had a segmented middle axis round which the lateral rays were arranged in a style of a palm leaf - among the living fishes this is found only on Australian lungfish.

Xenacanthus lived in fresh water such as swamps, lakes, and slow-moving rivers, where it hunted small fish, such as Amblypterus. It was preyed on by the Dimetrodon in the Permian, and phytosaurs such as Rutiodon in the Triassic. 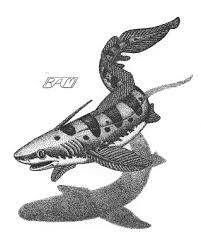