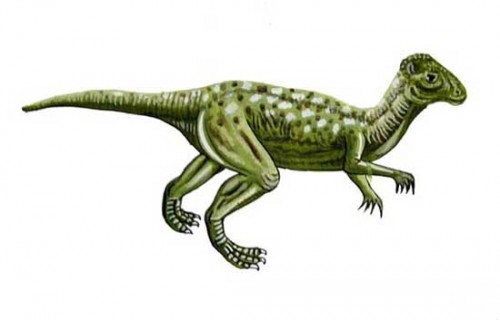 Wannanosaurus (meaning "Wannan lizard", named after the location where it was discovered) is a genus of basal pachycephalosaurian dinosaur from the Campanian-age Upper Cretaceous Xiaoyan Formation, about 80 million years ago (mya) in what is now Anhui, China. The type species, Wannanosaurus yansiensis, was described by Lian-Hai Hou in 1977.[1] It is known from a single partial skeleton, including a partial skull roof and lower jaw, an upper leg and lower leg, part of a rib, and other fragments. Because it has a flat skull roof with large openings, it has been considered primitive among pachycephalosaurs.[1][2] Sometimes it has been classified as a member of the now-deprecated family Homalocephalidae,[3][4] now thought to be an unnatural assembly of pachycephalosaurians without domed skulls.[2] Although its remains are from a very small individual, with a femur length of ~8 centimeters (3.1 in) and an estimated overall length of less than 1 meter (3.3 ft),[1] the fused bones in its skull suggest that it was an adult at death.[5] Like other pachycephalosaurians, it was probably herbivorous or omnivorous, feeding close to the ground on a variety of plant matter, and possibly insects as well.[2] Wannanosaurus/Gallery

Retrieved from "https://dinopedia.fandom.com/wiki/Wannanosaurus?oldid=119626"
Community content is available under CC-BY-SA unless otherwise noted.