Vulpes qiuzhudingi is an extinct species of fox found in the Himalayas. It was primarily carnivorous. The fossils, dating from between 5.08 and 3.60 million years ago, were found in the Zanda Basin and Kunlun Mountains of Tibet. It was named after Qiu Zhuding, a paleontologist from the Chinese Academy of Sciences. The species is believed/speculated to be the ancestor of the modern Arctic fox (Vulpes lagopus), which would support the "Out of Tibet" theory: namely, that a number of current arctic species trace their ancestry to species originally from the Tibetan Plateau. The Species of fox was likely predatorial; it might be from the few species of vulpes that achieved a true predator stasus rather than being primary secondary omnivores.

Reconstruction of the tibetean ecosystem, the very large fox in the background. 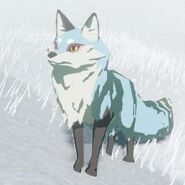 Add a photo to this gallery
Retrieved from "https://dinopedia.fandom.com/wiki/Vulpes_qiuzhudingi?oldid=144362"
Community content is available under CC-BY-SA unless otherwise noted.