Velociraptor (ve·loc·i·rap·tor) (Swift seizer or thief) was a small carnivorous dinosaur, well known thanks to Jurassic Park. It was one of the smaller dromaeosaurs, smaller than Utahraptor and Deinonychus. It lived in Mongolia and China during the Late Cretaceous, 75 to 71 million years ago.

The most amazing find in Mongolia may be the discovery of the skeletons of the small theropod Velociraptor ("swift seizer") with its right arm clamped firmly in the beak of the small sheep-sized ceratopsian Protoceratops. Both were fighting when a sand dune collapsed, killing the two dinosaurs and preserving them in their death pose until 1971, when they were unearthed. Another theory states they fatally injured each other.

In 1922, the first specimen of Velociraptor was found by the American Museum of Natural History. Like the famous death-pose specimen, it was found in the Late triassic sandstones of the Djadokhta Formation in the Gobi Desert, and was also found lying alongside a skull of Protoceratops.

Velociraptor was a small theropod, with a large sickle-shaped claw on the second toe of its foot, it had a long, narrow snout, which is different from the other members of its family. The jaws were lined with serrated teeth for tearing flesh, it swallowed its food in gulps instead of chewing, like most theropods. The arms were long and it had strong chest and arm muscles, for grasping onto prey.

Since the death-pose specimen was found with a Protoceratops, it probably ate this small ceratopsian, but it may have hunted even larger prey. Its diet also included small animals, such as lizards. Another dromaeosaurid feature that can be clearly seen in the death-pose are the long pieces of bone along the sides of the bones of the tail to stiffen it. This allowed the tail to act as a balance when the animal walked and ran. The tail, however, was still flexible, expecially since it was attached to the hips. The complete "Struggle to the death" skeleton has not yet been described, but it will certainly reveal even more new and exciting facts about this fascinating genus.

Velociraptor was a small, dog-sized dinosaur that flourished in the mid-Cretaceous period. This dinosaur has become one of the most famous, due to its prominent role in the Jurassic Park movies.

Velociraptor was closely related to the North American Deinonychus. Not massive like Tyrannosaurus or Tarbosaurus, this smaller dinosaur was a fierce predator, being quick and agile, as is portrayed in the movie 'Jurassic Park'.

The Velociraptor in 'Jurassic Park' is 400% larger than the fossil record would indicate (standing 8–10 feet/2.43-3.048 meters tall and 4.25–6 meters long). It also resembles Deinonychus more than it does Velociraptor.

This would create the feeling that the characters where being chased constantly by something a little more scary and dangerous than a turkey sized dromaeosaur. The so called raptor in the movie is more similar to a Utahraptor or Deinonychus in size. Velociraptor was roughly the size of a turkey.

The raptors in the 'Jurassic Park' series also lack feathers and are bigger; instead of feathers, they are given squamas on their backs. The reason for the differences may be the result of genetic splicing errors and the utilization of amphibian DNA to fill in the genetic code sequence gaps, as well as the fact that it was not widely known that non-avian dinosaurs had feathers at the time of the original films making.

Velociraptor was a carnivore who probably ate anything it could capture, since its size was no larger than a turkey, the most likely prey were small mammals and dinosaurs. Some of the Velociraptor skeletal remains have been found in close proximity of each other, what led scientists to believe that Velociraptor probably hunted in packs; however, they have also been interpreted as being congregations similar to scavenging komodo dragons, or nesting birds. They used their front claws to capture and hold their prey while they ate.

We have no clear evidences that Velociraptor hatched from eggs. According to paleontologist David Burnie, it's quite possible that Velociraptor gave birth to live young. The female pelvis is very wide, which may be a proof for this theory. Despite this, fossilized skulls of Velociraptor young were recently found. Looking at them, we determined young Velociraptors had proportionally shorter snouts and bigger eyes than the adults, what's very usual for avian animals, such as Velociraptor. This indicates that the babies were fed and looked after by the adults for some period after hatching. However, some modern reptiles like turtles also have these skewed proportions, so they could equally be related to simply sense and ecology, with large eyes favouring nocturnal vision. Based on other deinonychosaurs, Velociraptor was probably precocial, meaning that, even if it had parental care, it was capable of moving around and finding it's own food very on it's lifetime.

Velociraptor had a fairly large brain, compared to other dinosaur species, which made

them fairly intelligent compared to other non-avian theropods. However, their intelligence was still not above that of modern "basal" birds like ostriches and geese.

The study of dinosaur skulls demonstrates that the Velociraptor had excellent hearing and binocular vision. All dinosaurs have a notch in their skull and middle ear bones where 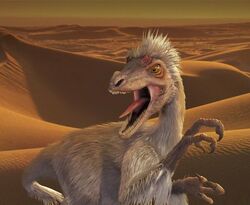 the tight ear drum stretched. Crocodiles and birds, both of which are related to the dinosaurs, have a keen sense of hearing, so it is not surprising that dinosaurs also had an acute sense of hearing. Nerve endings around the outside of the Velociraptor’s skull and the large olfactory lobes, suggests that the dinosaur's snout was highly sensitive to touch and smells. The Velociraptor like other predators had binocular vision, which allows them to see th dells sucks

Velociraptor is common in films and documentaries. It is featured in all of the Jurassic Park movies and makes an appearance in the Walking With Dinosaurs Special: The Giant Claw. It also appeared in Dinosaur Revolution and Dinosaur Planet. It is one of the dinosaurs featured in Jerry Pallotta's book "Who Would Win? Tyrannosaurus Rex vs. Velociraptor". It also appears in Zoo Tycoon and Zoo Tycoon 2. It appears in the game Parkasaurus.

Retrieved from "https://dinopedia.fandom.com/wiki/Velociraptor?oldid=119624"
Community content is available under CC-BY-SA unless otherwise noted.