Varanopidae was a family of eupelycosaurs that resembled monitor lizards and might have had the same lifestyle, hence their name. No known varanopids developed a sail like Dimetrodon. Their size varied from lizard-sized to dog-sized creatures. Varanopids already showed some advanced characteristics of true pelycosaurs such as their deep, narrow, elongated skulls. Their jaws were long and their teeth were sharp. However, they were still primitive by mammalian standards. Like many other pelycosaur families, they evolved from an Archaeothyris-like synapsid in the Late Carboniferous. They had long tails, lizard-like body, and thin legs. The varanopids were mostly carnivorous, but as they were reduced in size, their diets changed from a carnivorous to an insectivorous lifestyle. Compared to the other animals in Early Permian, varanopids were agile creatures. But the last of the varanopids were outcompeted, having been replaced by the evolving diapsids and by the end of the Middle Permian, they became extinct. A varanopid from the latest Middle Permian Pristerognathus Assemblage Zone is the youngest known varanopid and the last member of the "pelycosaur" group of synapsids.

Apsisaurus witteri was a varanopid known from Texas of the United States. It was first named by Michel Laurin in 1991 and the type species is Apsisaurus witteri. Apsisaurus witteri is known from the holotype MCZ 1474, a three-dimensionally preserved partial skeleton including an incomplete skull and mandibles. The skull roof of Archeria is also articulated to the postcranial skeleton. It was collected in the Archer City Bonebed 1 site, from the Archer City Formation of the Wichita Group, dating to the Early Permian epoch.Apsisaurus was formerly assigned as a "eosuchian" diapsid.In 2010, it was redescribed by Robert R. Reisz, Michel Laurin and David Marjanovic and classified as a basal varanopid synapsid. The cladogram below is modified after Reisz, Laurin and Marjanovic, 2010:

Thrausmosaurus serratidens, like all varanopids, this creature resembled the modern monitor lizard and may have had the same lifestyle. The type and only species was described by R. C. Fox in 1962, from three fossilized jaw fragments bearing teeth. The specimens were recovered from the fissure-fill deposits uncovered in a Limestone Quarry, north of Fort Sill, Comanche County, Oklahoma, USA. These deposits are dated to the Kungurian (Leonardian) of the Lower Permian.

Thrausmosaurus was designated by Fox to belong to the family Sphenacodontidae based on the structure and curvature of the teeth. The genus remained in Sphenacodontidae until the type material was reexamined. In 1986 the type specimen was reassigned to Synapsida incertae sedis by R. R. Reisz, who was unable to identify the relationship of the material to other synapsids. This opinion was reaffirmed by Sullivan and Reisz in 1999. Upon further examination of the specimens, Evans et al. in 2009 reaffirmed the validity of the genus name and placed the genus in the Varanopidae. However they were unable to determine enough distinct characters to maintain the species Thrausmosaurus serratidens, and thus declared the name nomen dubium.

Pyozia is an extinct genus of basal Middle Permian varanopid synapsid known from Russia. It was first named by Jason S. Anderson and Robert R. Reisz in 2004 and the type species is Pyozia mesenensis. Pyozia mesenensis is known from the holotype PIN 3717/33, a three-dimensionally preserved partial skeleton including an nearly complete skull. It was collected from the Krasnoschelsk Formation, dating to the Capitanian stage of the Guadalupian epoch, about 265.8-263 million years ago. The cladogram below is modified after Anderson and Reisz, 2004:

Varanosaurus ("monitor lizard") is an extinct genus of early pelycosaur synapsid that lived during the early Permian (260 million years ago). As its name implies, Varanosaurus looked very similar to present-day monitor lizards. It had a flattened, elongated skull and a pointed snout with a row of sharp teeth, including two pairs of conspicuous pseudocanines, implying that it was an active predator. It was a small, nimble reptile, up to 1.5 metres (4.9 ft) long. Varanosaurus probably lived in swamps, competing with the larger Ophiacodon for food. 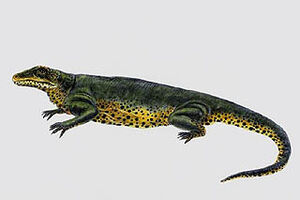 Watongia meieri was a varanopid from the Middle Permian of Oklahoma. Only one species is descript, Watongia meieri, from Chickasha Formation. Its was assigned to family Gorgonopsidae by Olsonand to Eotitanosuchia by Carroll.Reisz and collaborators assigned the genus in Varanopidae.

Aerosaurus (meaning "aerial lizard") is an extinct varanodontine genus, It lived from the Late Carboniferous to Early Permian in North America. 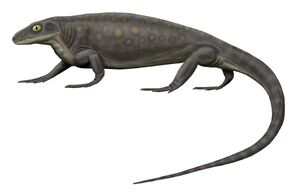 Aerosaurus wellesi (Langston & Reisz, 1981).
Add a photo to this gallery

Varanops brevirostris (meaning "short monitor faced") is an extinct species of Early Permian varanopid synapsid known from Texas and Oklahoma of the United States. It was first named by Samuel Wendell Williston in 1911 as a second species of Varanosaurus, Varanosaurus brevirostris.In 1914, Samuel W. Williston reassigned it to its own genus and the type species is Varanops brevirostris.V. brevirostris is known from the holotype FMNH UC 644, a three-dimensionally preserved nearly complete and articulated skeleton including an nearly complete skull and mandibles. It was collected in the Indian Creek, 35 site (=Cacops Bonebed), from the Arroyo Formation of the Clear Fork Group, Baylor County of Texas, dating to the early Kungurian stage of the Cisuralian Epoch, about 279.5-272.5 million years ago. Many well preserved specimens from the same locality and horizon of the type specimen, including FMNH UR 2423, nearly complete skull and mandibles, MCZ 1926, complete skull and mandibles and FMNH P 12841, partial skeleton, are referred to V. brevirostris.One articulated skeleton with bite marks was found in southwest of Abilene (Arroyo Formation), Taylor County of Texas.[4] Specimens (OMNH 73156-73178) of V. brevirostris were also collected in the Richards Spur, from the Garber Formation (Dolese Brothers Limestone Quarry) of the Sumner Group, Comanche County of Oklahoma, dating to the same age.Those remains came from at least three individuals, and represents the first varanodontine material from the Richards Spur. Finally, TMM 43628-1, a partial skeleton with nearly complete skull, was collected in the Mud Hill locality, from the Vale Formation of the Clear Fork Group, Taylor County, also dating to the same age.Varanops is the type genus of the famiy Varanopidae. Cladistic analysis performed by Nicolás E. Campione and Robert R. Reisz in 2010 suggests that Varanops is a derived varanodontine, sister taxon to the clade formed by Varanodon and Watongia. 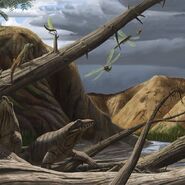 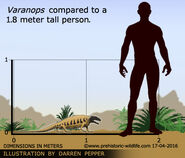 Add a photo to this gallery
Retrieved from "https://dinopedia.fandom.com/wiki/Varanopidae?oldid=133235"
Community content is available under CC-BY-SA unless otherwise noted.