Tropeognathus (meaning "keel-tipped jaw") is a genus of large pterosaurs from the late Cretaceous Period of South America. It was member of the Ornithocheiridae (alternately Anhangueridae), a group of pterosaurs known for their keel-tipped snouts, and was closely related to species of the genus Anhanguera. It is known primarily for the species Tropeognathus mesembrinus, though a second species, Tropeognathus robustus, has been named in the genus. The keel-tipped mouth had a similar appearance to that of the Coloborhynchus.

An Adult Tropeognathus “Ornithocheirus” feeding it’s chick a small fish, notice the crest on the adult's beak, the males probably used this to attract a mate. 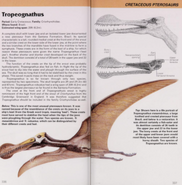 Add a photo to this gallery
Retrieved from "https://dinopedia.fandom.com/wiki/Tropeognathus?oldid=210660"
Community content is available under CC-BY-SA unless otherwise noted.