Not to be confused with Torvosaurus

Torosaurus ("perforated lizard", in reference to the large openings in its frill) is a genus of herbivorous ceratopsid dinosaur that lived during the late Maastrichtian stage of the Cretaceous period, between 68 and 66 million years ago. The species was named by Othniel Charles Marsh in 1891. Fossils have been discovered across the Western Interior of North America, from Saskatchewan to southern Texas. [1]

Torosaurus possessed one of, if not the the largest skull of any known land animal. The frilled skull reached up to 2.77 metres (9.1 ft) in length. From head to tail, Torosaurus is thought to have measured about 7.6 to 9 m (24.9 to 29.5 ft) long and weighed four to six tonnes. [2] Torosaurus is distinguished from the contemporary Triceratops by an elongate frill with large openings (fenestrae), long squamosal bones of the frill with a trough on their upper surface, and the presence of five or more pairs of hornlets (epoccipitals) on the back of the frill. Torosaurus also lacked the long nose horn seen in Triceratops prorsus, and instead resembled the earlier and more basal Triceratops horridus in having a short nose horn. Three species have been named, Torosaurus latus, T. gladius and T. utahensis. However, T. gladius is no longer considered a valid species, and is now considered a synonym of T. latus. [3]

Recently the validity of Torosaurus has been disputed. A 2010 study of fossil bone histology combined with an investigation of frill shape concluded that Torosaurus probably represented the mature form of Triceratops, with the bones of typical Triceratops specimens still immature and showing signs of a first development of distinct Torosaurus frill holes. During maturation, the skull frill would have been greatly lengthened and holes would have appeared in it. In 2011, 2012 and 2013 however, studies of external features of known specimens have claimed that morphological differences between the two genera preclude their synonymy. The main problems are a lack of good transitional forms, the apparent existence of authentic Torosaurus subadults, different skull proportions independent of maturation and the assertion that hole formation at an adult stage is not part of a normal ceratopsian maturation sequence. 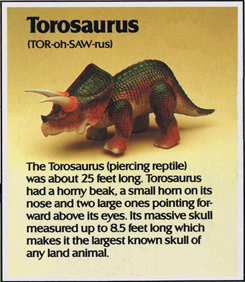 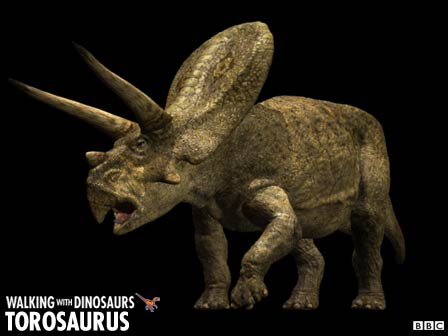 Retrieved from "https://dinopedia.fandom.com/wiki/Torosaurus?oldid=144197"
Community content is available under CC-BY-SA unless otherwise noted.