Titanosaurs (members of the group Titanosauria) were a diverse group of sauropod dinosaurs which included Saltasaurus and Isisaurus. The titanosaurs were the last surviving group of long-necked sauropods, with taxa still thriving at the time of the extinction event at the end of the Cretaceous. The group includes the largest land animals known to have existed, such as Patagotitan— estimated at 37 m (121 ft) long with a weight of 69 tonnes (76 tons)[1]—and the comparably sized Argentinosaurus and Puertasaurus from the same region. The group's name alludes to the mythological Titans of Ancient Greece, via the type genus (now considered a nomen dubium) Titanosaurus. Together with the brachiosaurids and relatives, titanosaurs make up the larger clade Titanosauriformes. 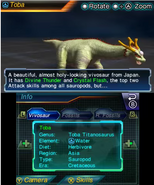 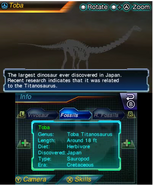 This dinosaur-related article is a stub. You can help Dinopedia by expanding it.