Titanohierax gloveralleni is a genus of giant hawk known from fossils found in Cuba, Hispaniola and the Bahamas. Titanohierax was a giant hawk with a measured fore-claw length of 57 mm (2.2 in) and an estimated weight of around 7.3 kg (16 lb), making roughly equal in size to the females of the largest living eagles. This raptor lived in the Antilles, where it was probably an apex predator. 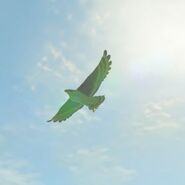 Add a photo to this gallery
Retrieved from "https://dinopedia.fandom.com/wiki/Titanohierax?oldid=118902"
Community content is available under CC-BY-SA unless otherwise noted.