Titanoboa, meaning "Titanic Boa," was a very large genus of snake that lived approximately 60–58 million years ago, during the Paleocene epoch, a 5-million-year period immediately following the Cretaceous extinction event. The only known species is Titanoboa cerrejonensis, the largest snake ever discovered, which supplanted the previous record holder, Gigantophis.

In 2009, mining in South America led construction workers to come across fossils from the early Paleocene Era.

Among them were giant turtles guessing they ate giant turtle, large fish, and giant crocodiles. One piece of vertebrae was sent to the Smithsonian thought to have been belonged to a crocodile, but a closer look at the fossils by a snake expert while unwrapping the backbone proved this to not be the case. The fossils actually belonged to the largest known species of snake that ever lived. Paleontologists were eager to go to South America and see what more they can uncover of this titanic snake. After several weeks of failed attempts, they finally found several bones and found several more larger vertebrae and even a skull, and were able to conclude that this massive snake was by far the largest ever discovered. It was named Titanoboa cerrejonensis, for its impressive size and being found in the area of the Cerrejon jungle. A closer analysis of the skull proved that this reptile was more closely related to Boas than Anacondas, despite being so big. Many scientists have said that Titanoboa is the find of the decade, and that it's one of the most important finds since finding Tyrannosaurus rex in 1905. Not just Titanoboa was an important find, but the entire fossil site was also a great contribution to science. It revealed a new type of ecosystem in South America previously unknown to science and shows what kinds of animals ruled South America after the dinosaurs were wiped out. It was 42 feet long the biggest snake in the world, probably longer than the T.Rex at times.

Titanoboa was one of the largest land animals of it's time, so it needed a lot of food to keep healthy. However it did not eat that often. The crocodiles of the ancient Cerrejon rainforest fell prey to Titanoboa, after eating it, the snake would not have to feed for a whole year. Titanoboa was a chronological ancestor of boas and anacondas, and like them it was a constrictor, but could give ten times the pressure of that from a common anaconda. Titanoboa would also eat large fish on usual occasion. Like modern-day snakes, it could also dislocate its jaws to help swallow prey bigger than its own head whole such as small mammals. It would also sometimes eat other snakes but paleontologists are not sure. There's also evidence that points out it also ate species of aquatic invertebrates, such as variants of large fish; but there's no proof or indication that this was its only Prey item. We can only suggest that the Titanoboa ate a wide variety of things from crocodiles, to aquatic prey, such as large amphibians or car-sized fish.

Titanoboa was the largest snake ever discovered, measuring a max-size of about 42 feet (12.8 meters) long and 1.135 tons in weight. Although more closely related to modern-day boas, most scientists agree that this monster snake behaved more like a modern-day green anaconda, spending most of its time in water to support its massive size. Like most snakes, this snake was an expert ambush predator, capable of striking at incredible speeds at unsuspecting prey. Along with spending most of its time underwater, Titanoboa also hunted under water, since no prey capable of feeding it lived strictly on land and being a terrestrial hunter would've been damaging to its internal organs from its massive weight. Like modern constrictors, it had a very muscular, legless body that was perfectly designed for wrapping around large prey and squeezing the life out of it.

It also had a jaw that could dislocate and help swallow prey items whole that were bigger than its head. It's also likely that, when in danger from massive, 40-foot (12-meter) long crocodiles, Titanoboa could regurgitate a large meal that it had just eaten to get away. Like modern-day snakes, it also had a forked tongue that helped it locate its prey underwater.

To find out how this large and heavy snake could move, scientists constructed a life-size and weight robotic model to study the movement of Titanoboa, which appealed to the fact that the Titanoboa smashed down on its prey when constricting, would crush its prey or whatever that got trapped in there would die from respiratory failure, which was immediate. The pressure would've crushed the prey's ribs, and obliterated its lungs, which killed the prey right away.

Ever since its discovery in early 2009, Titanoboa has been gaining a lot of public attention. It had its own documentary by the Smithsonian Channel, where it talked about what this huge reptile looked like, how it lived, and how its environment looked while scientists tried to further uncover it and piece it together. It even had its own entire article in the Smithsonian magazine. 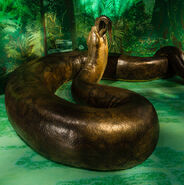 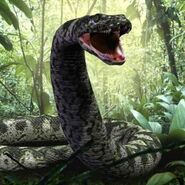 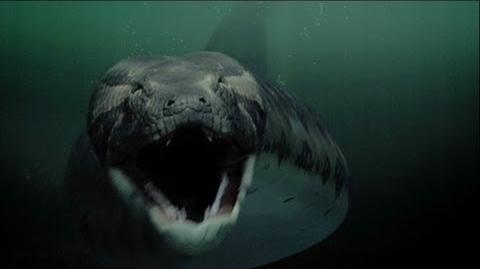 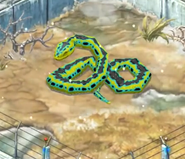 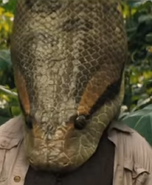 Ark titanoboa. Note the ridiculous frills and a texture reminiscent to that of a ball/royal python
Add a photo to this gallery

Retrieved from "https://dinopedia.fandom.com/wiki/Titanoboa?oldid=172450"
Community content is available under CC-BY-SA unless otherwise noted.