Titanis was species of large extinct flightless carnivorous bird of the family Phorusrhacidae ('Terror birds'), endemic to North America continent, during the Blancan Stage of the Pliocene epoch living 4.9—1.8 million years ago, and died out during the Gelasian Age of the earliest Pleistocene, existing approximately 3.1 million years.

The generic name, Titanis, refers to the titans, Ancient Greek gods that preceded the Twelve Olympians, in allusion to the bird's size. The specific name, T. walleri, honors the holotype's collector, Benjamin I. Waller.

It lived approximately 5-2 million years ago (early Pliocene to early Pleistocene) in North America. Fossil evidence has been found in Gilchrist County, Florida dating from 3.0 to 2.9 million years.

From circumstantial evidence (i.e., bone fractures), it has been suggested that the species did not become extinct until 15,000 years ago, but more precise dating by McFadden and colleagues refutes such a late date; all known Titanis fossils appear to be at least 2 million years old. Titanis was part of the group of giant flightless birds called the Phorusrhacidae, which are nicknamed "terror birds", and has been thought to represent the youngest species of the lineage (recently, a significantly younger South American example has been reported). The Phorusrhacidae originated in South America; Titanis is the only known member of the branch of the group that migrated out of that continent during the Great American Interchange. It is estimated that Titanis could run at speeds of 65 km/h.

It was 2.5 meters (8 feet 2 inches) tall and weighed approximately 150 kilograms (330 lbs), but with large variance (perhaps indicating strong sexual dimorphism). its skull has not been found, it most probably would have been large, with a huge, axe-like beak, like its relatives.

The wings were small and could not have been used for flight. The wing bones articulated in an unusual joint-like structure, suggesting the digits could flex to some degree. It also had a relatively rigid wrist, which would not have allowed the hand to fold back against the arm to the same degree as other birds. This led one scientist, R.M. Chandler, to suggest that the wings may have supported some type of clawed, mobile hand similar to the hands of non-avian theropod dinosaurs, such as the deinonychosaurs (also popularly known as "raptors"). However, it was later pointed out that this wing joint is not in fact unique, and is present in seriamas (modern members of the same bird group to which Titanis belonged), which do not have any specialized grasping hands.

Overall, Titanis was very similar to the South American Phorusrhacos and Devincenzia, its closest relatives. However, it differs from these in having a shorter, thicker neck, a bulkier head, and an overall more heavily-built bodily structure. Little is known of its body structure, but it seems to have been less wide-footed than Devincenzia, with a proportionally much stronger middle toe. (Onactornis is now considered a junior synonym of Devincenzia).

To many avid readers, Titanis will be familiar as the predatory bird in James Robert Smith's best-selling novel (and soon-to-be-movie) The Flock. This prehistoric bird could certainly wreak its share of mayhem: at eight feet tall and 300 pounds (give or take a few inches and pounds for possible sexually dimorphic differences between males and females), Titanis closely resembled its theropod dinosaur forebears, especially its puny arms with long-taloned, grasping hands. As scary as it was, though, Titanis wasn't the most dangerous hunting bird of ancient times: in fact, it was a late, North American descendant of a race of South American carnivores, the phorusrachids (typified by Phorusrhacos, also known as the Terror Bird), which attained comparable sizes. By the early Pleistocene epoch, about two million years ago, Titanis had managed to penetrate as far north as Texas and southern Florida, the latter of which is The Flock's modern-day setting. 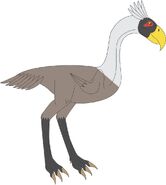 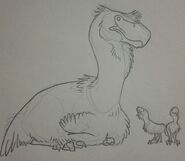 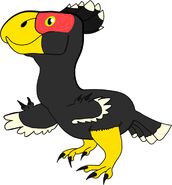 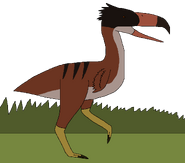 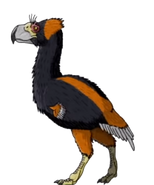 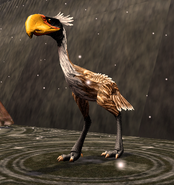