The Marsupial Lion (Thylacoleo carnifex; meat cutting-marsupial-lion; pouched-lion; pouchlion) was a large, carnivorous marsupial that lived in Australia from the early to late Pleistocene Era (1,600,000–46,000 years ago). Despite the animal's name, it had no relation to the feline family, but was closely related to modern wombats and koalas; the resemblance was a very noticable example of the Convergent Evolution phenomenon. It was one of the apex predators at the time and most likely fed on early man before being killed off due to climate change, loss of its prey, and, man itself.

The genus was first published in 1859, erected to describe the type species Thylacoleo carnifex.

Although the marsupial lion had been first discovered in the mid 19th century, it's only been recently that we've found enough bones to make a clear visual of what it looked like. The marsupial lion was between the size of a jaguar and lioness, growing to be about 5 feet long from nose to tail, 2.5 feet tall (75 cm) at the shoulder, and an estimated average of 100 to 130 kg (220 lb to 285 lb). The largest estimated weight of a specimen was 160 kg, which mostly occurred in the southern parts of Australia. With this, it was the largest mammalian predator to have ever lived in Australia. Despite its size, it had a very strong bite force with a 100 kg specimen having a similar bite force to that of a 250 kg African Lion. Pound for pound, it had one of the strongest bites in history. It had sharp, slicing teeth that were designed to clamp down and, literally, butcher its preys' flesh. Like most modern marsupials, it spent most of its time in trees. This is probably due to its very robust build and limb structure which would've made it rather slow on land. As an ambush predator, it would lie in wait until its prey, such as large short-faced kangaroos Procoptodon, or an ancestor of the wombat the size of a rhino Diprotodon, walked by and with Thylacoleo in wait, would jump down from the treetops and latch onto its prey, using its powerful bite force and claws to secure a tight grip onto its struggling victim, and cut away the flesh with its jaws. Also, unlike most extant predators who have the canines as their main jaw weapon, Thylacoleo's canines were actually blunt, something not seen before. To make up for this however, it evolved specialized carnassials that acted just like shears made to easily separate flesh from the bone, which probably allowed it to take on the giant Diprotodon.

It also possessed a set of retractile claws, something not seen before in marsupials, and a large thumb claw. The size of this thumb claw led some researchers to speculate that Thylacoleo used its jaws as a holding tool, which when coupled with the bite force, would've worked efficiently along with the claws that were going to be doing the main killing, basically the opposite of how extant felids killed their prey. The feline - large predator like appearance is; very likely; the unprecedented result of the phenomena known as; the convergent evolution.

The marsupial lion lived in Australia, where it was mostly grassland with a few random trees. It shared its environment with its prey, with the giant short-faced kangaroo Procoptodon, the giant wombat relative Diprotodon, and the mega lizard Megalania, an apex predator rival, and even early man (which it probably preyed upon and rivaled for top predator). When it went extinct, no other Australian mammal became a mega-carnivore as it had, and no animal had evolved to take its predatory role. There are rumors of it having survived, but just as in case with Megalania they are not confirmed. 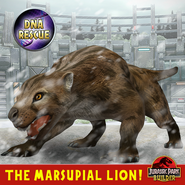 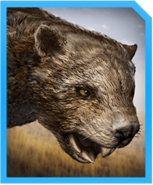 As it appears in Jurassic World: alive 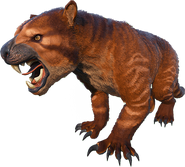 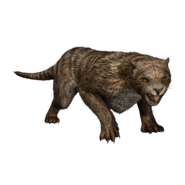 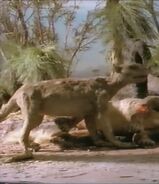