Once existing throughout Australia the thylacine is believed to become extinct during the early 20th century, when the last known capture specimen died at the Beaumaris Zoo in Hobart, Tasmania on September 7, 1936. However, many cryptozoologists and Tasmanian residents claim that some individuals survive in Tasmania and even in southern Australia. The last thylacine was called Benjamin. There is also a reported sighting of a thylacine showing up around 1970 in Tasmania to a group of people, although this has not been confirmed yet.

The thylacine weighs in at 20 - 30 kg, and it closely resembles a canid. This is most likely due to convergent evolution in which one animal evolves traits that other animals from different parts of the world would normally have. It also has a very strong bite force indicating that it may have preyed on large animals such as sheep which, was the reason Australian farmers hunted it down before its inevitable extinction, but with new studies, due to a severe stressing found in the mandibular condyle and the lower jaw, made researchers think it may have specifically evolved to target small prey that would have not struggled much when caught in the jaws. However, this may not be entirely true, because there is an unconfirmed account of a thylacine killing a Bull Terrier when backed into a corner. Thylacine's were also driven out of mainland Australia by Humans and Dingos.

The lifespan of the Thylacine was about 5 to 7 years and captivity about 9 years.

Despite how the last thylacine died in 1936 however in the 1952-1953 a photo of a thylacine was caught on camera in Mawbanna.

In May 2020, the last known footage of the thylacine was newly rediscovered.

In August 2020, the thylacine was revealed to be smaller than originally assumed. It was once thought to weigh about 65 pounds, but it actually weighed only 37.5 pounds. 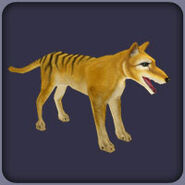 Thylacine at Mawbanna and photographed in 1952-1953 meaning that it still alive. 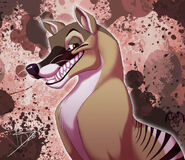 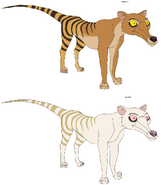 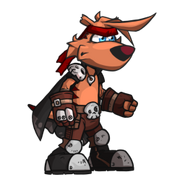 Add a photo to this gallery
Retrieved from "https://dinopedia.fandom.com/wiki/Thylacine?oldid=157986"
Community content is available under CC-BY-SA unless otherwise noted.