The Dino King is the United States title for the 3D Korean computer-generated film Speckles The Tarbosaurus, first released in Korea in January 2012.

80 million years ago, during the Cretaceous period, a young Tarbosaurus named Speckles, for his unique birthmark, lives and hunts with his older juvenile brother, Quick, his twin sisters and his mother. Speckles is left alone when a rogue, scar-faced Tyrannosaurus named One-Eye causes a massive stampede to kill Speckles' family in order to usurp their territory.

Four years later, Speckles has scraped by on his own, scavenging and raiding nests. One day while attempting to steal food from One-Eye, Speckles encounters a female Tarbosaurus named "Blue-Eyes" and the pair team up to hunt and survive together.

Over the years, Speckles and Blue-Eyes attempt to maintain a hunting territory away from One-Eye. Eventually, however, One-Eye discovers their hunting grounds and again attempts to usurp their territory. Speckles fights and eventually defeats and drives away his old nemesis.

After defeating One-Eye, Speckles and Blue-Eyes reclaim Speckles' old family nest and hunting grounds. Now a mature adult pair with three young offspring, the family is happy until forced to flee from their territory by a volcanic eruption. Speckles becomes the alpha of a large migratory herd of dinosaurs fleeing the natural disaster. During the disaster, one of the children is killed and Blue-Eyes is wounded; she eventually collapses from exhaustion two weeks later. Seeing this, a large pack of Velociraptors attacks the Tarbosaurus family, and though Speckles valiantly tries to hold them off, Blue-Eyes dies from her wound and Speckles is forced leave her body behind in order to save the children.

After a long journey, the herd arrives at a new, fertile area in which to settle. However, Speckles once again encounters One-Eye, who has been driven out by the same natural disaster. As before, One-Eye causes the herbivores to stampede in order to ambush Speckles and his two babies. Another child is killed and the remaining child, Speckles Jr., is pushed over a cliff into the ocean. Speckles dives into the sea to save him and is pursued by One-Eye. One Eye is attacked and eaten alive by two gigantic Tylosaurus. Speckles eventually reaches Speckles Jr. and returns him safely to shore.

In the closing monologue, Speckles wishes a peaceful, happy life for his son.

Prehistoric Creatures in the Film

Animals in the Movie 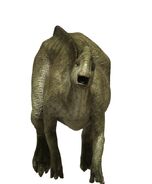 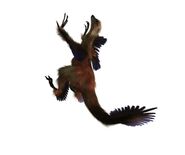 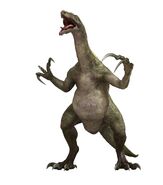 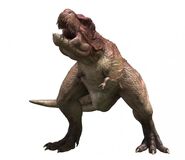 Velociraptor
Add a photo to this gallery
Retrieved from "https://dinopedia.fandom.com/wiki/The_Dino_King?oldid=142116"
Community content is available under CC-BY-SA unless otherwise noted.