Tarbosaurus bataar (tar-bo-SORE-us) (Greek, "alarming lizard") was a member of the dinosaur family of tyrannosaurids, which flourished during the Late Cretaceous Period, 70 million years ago. In the past some paleontologists considered it a species of Tyrannosaurus, but evidence suggests that Tarbosaurus is too distinct from Tyrannosaurus for that to be the case. It would have coexisted with another, much smaller tyrannosaurid, the alioramin Alioramus.

Although many specimens of this genus has been found, little definite data is confirmed on the dinosaur as of 1986, though it is presumed and has been shown to share many characteristics with other tyrannosaurids. 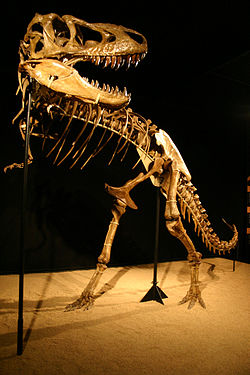 During studies of the animal, the upper jaw proved very interesting, as it possessed more than 20 extremely large, knife-shaped teeth. The skull in general seems to have many similarities with its North American cousin, Tyrannosaurus rex, prompting many to place it in the Tyrannosaurus genus (the resulting designation would then be Tyrannosaurus bataar). The close similarities have also prompted some scientists to suggest a possible link between the North American and Eurasian continents at that time, perhaps in the form of a land bridge. The discovery of Lythronax further cements this relationship, as it shows Tarbosaurus is most closely related to Tyrannosaurus, and Zhuchengtyrannus while Lythronax stands as the sister taxon to this clade.

Only one species of Tarbosaurus, T. bataar, has been officially established.  Tarbosaurus is very well-represented in the fossil record, known from dozens of specimens, including several complete skulls and skeletons. These remains have allowed scientific studies focusing on its phylogeny, skull mechanics, and brain structure. Although smaller than Tyrannosaurus, Tarbosaurus was one of the largest tyrannosaurids. The largest known individuals were about 12 meters (39 feet) long. The mass of a fully grown individual has never been published, although it is estimated to have been slightly smaller than the average Tyrannosaurus. Tarbosaurus is unique among Tyrannosaurids in that it possesses a locking mechanism in its jaws; possibly an adaptation for hunting sauropods. This locking mechanism also made the theropod's skull more rigid as a result.

While juvenile tyrannosaurids in general are rare, a skeleton of a very young Tarbosaurus (estimated to be two or three years of age) indicates they had very different niches from the adults and may have been nocturnal, based on measurements of their sclerotic rings. Whether the adults were nocturnal as well is not known.

Skin impressions are known from Tarbosaurus, and show the animal had non-overlapping scales. However, fossil poachers destroyed the impressions, and as such they can no longer be studied. Footprints attributed to the genus are also known from the Nemegt Formation.

Tarbosaurus fossils have been found primarily in the Nemegt Formation of Mongolia, and are believed to be early Maastrichtian in age (circa 70 mya). At the time, Mongolia was a seasonal floodplain on the edge of a desert that was prone to long dry seasons and short wet seasons. The resulting environment may have looked similar to the modern Okavango Delta of Africa. Regardless, it was an environment capable of supporting a wide array of large dinosaur species.

Tarbosaurus would have shared the Nemegt with many genera and species of animals. While Tarbosaurus was at the top of the food chain, it also shared its environment with other predators, such as the smaller Alioramus, another tyrannosauroid belonging to the Alioramini, the dromaeosaurid Adasaurus, and troodontids such as Borogovia, Tochisaurus, and Zanabazar, oviraptorosaurs Elmisaurus, Nemegtomaia, Rinchenia or Bagaraatan, (which may actually be a basal tyrannosauroid rather than an oviraptorosaur). Other theropods, like the gigantic Therizinosaurus, and ornithomimosaurs such as Anserimimus, Gallimimus, and gigantic Deinocheirus dwelled here as well. Other dinosaurs of note that resided in the Nemegt included Saurolophus (also native to North America), ankylosaurids such as Tarchia and Saichania, the pachycephalosaurid Prenocephale, and the titanosaurid Nemegtosaurus (which may or may not be synonymous with Opisthocoelicaudia). All would have been potential prey for adult Tarbosaurus, while adolescent Tarbosaurus may have been forced to compete with Alioramus for food due to occupations of a similar niche.

Tarbosaurus bataar was originally described as a species of Tyrannosaurus, an arrangement that has been supported by some more recent studies. Others prefer to keep the genera separate, while still recognizing them as sister taxa. A 2003 cladistic analysis based on skull features instead identified Alioramus as the closest known relative of Tarbosaurus, as the two genera share skull characteristics that are related to stress distribution and that are not found in other tyrannosaurines. If proven, this relationship would argue against Tarbosaurus becoming a synonym for Tyrannosaurus and would suggest that separate tyrannosaurine lineages evolved in Asia and North America. The two known specimens of Alioramus, which show juvenile characteristics, are not likely juvenile individuals of Tarbosaurus because of their much higher tooth count (76 to 78 teeth) and their unique row of bony bumps along the top of their snouts.

Retrieved from "https://dinopedia.fandom.com/wiki/Tarbosaurus?oldid=143199"
Community content is available under CC-BY-SA unless otherwise noted.