Stupendemys was a species of gigantic prehistoric freshwater testudine (side-necked turtle) from Late Miocene to Pliocene South America. It has been known to be prey for Gryposuchus and Purussaurus.

It lived over 10 million years ago in what is now South America. It was a herbivore and fed on underwater plants at the bottom of rivers and lakes. Its fossils have been found in northern South America, in rocks dating from the late Miocene to the very start of the Pliocene, about 6 to 5 million years ago.

Stupendemys's carapace measured over 1.80 m (5.9 ft) in length and was also very wide. With an estimated total carapace length of more than 3.3 m (11 ft), it was the largest turtle that ever existed, surpassing even the Mesozoic sea turtle Archelon. The largest freshwater turtle living today is the Arrau turtle, which is a relative to Stupendemys, but the Arrau turtle measures only 75 centimetres (30 in). Two species have been described to date. Stupendemys geographicus was more robust; its remains have been found in the Urumaco Formation of Venezuela, northern South America. [1] 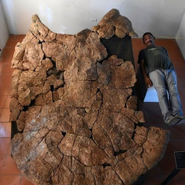 Add a photo to this gallery
Retrieved from "https://dinopedia.fandom.com/wiki/Stupendemys?oldid=121976"
Community content is available under CC-BY-SA unless otherwise noted.