A newly discovered sauropod from the Middle Jurassic of Niger, Spinophorosaurus nigerensis n. gen. et sp., is the most complete basal sauropod currently known. The taxon shares many anatomical characters with Middle Jurassic East Asian sauropods, while it is strongly dissimilar to Lower and Middle Jurassic South American and Indian forms. A possible explanation for this pattern is a separation of Laurasian and South Gondwanan Middle Jurassic sauropod faunas by geographic barriers. Integration of phylogenetic analyses and paleogeographic data reveals congruence between early sauropod evolution and hypotheses about Jurassic paleoclimate and phytogeography.

Spinophorosaurus is a genus of early sauropod dinosaur from Niger. It was recovered in a rock formation belonging to the lower part of the Irhazer Group, the age of which is unknown but may be Middle Jurassic or older. It is unusual for having spiked osteoderms, probably from the tail. The type species, S. nigerensis, was described by Remes et al. in 2009.

The genus name refers to the presence of spike-bearing osteoderms, Latin spina, spike, Greek phoro, to bear, and sauros, lizard. The species epithet refers to the Republic of Niger, the provenance of this taxon. 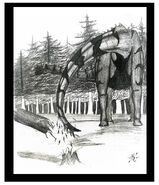 Add a photo to this gallery
Retrieved from "https://dinopedia.fandom.com/wiki/Spinophorosaurus?oldid=124749"
Community content is available under CC-BY-SA unless otherwise noted.