Sphenacodontidae (assigned to Eupelycosauria by Marsh, 1878) is a family of small to large, advanced, carnivorous, Late Pennsylvanian to middle Permian pelycosaurs. Primitive forms (Haptodus, etc) were generally small in size (60 cm to 1 meter), but during the later part of the early Permian these animals grew progressively larger (up to 3 meters or more), to become the top predators of their environments. The skull is long, deep and narrow, an adaptation for strong jaw muscles. The front teeth are large and dagger-like, whereas the teeth in the sides and rear of the jaw are much smaller (hence the name of the well-known genus Dimetrodon - "two-measure tooth", although all members of the family have this attribute). Several large (~3 meters) and advanced members of this group (Ctenospondylus, Sphenacodon, Secodontosaurus and Dimetrodon) are distinguished by a tall sail along the back, made up of elongated vertebral neural spines, which in life must have been covered with skin and blood vessels, and presumably functioned as a thermoregulatory device. However, possession of a sail does not appear to have been essential for these animals. For example there is the case in which one genus (Sphenacodon - fossils known from New Mexico) lacks a sail, while a very similar and closely related genus (Dimetrodon - fossils known from Texas) has one. During the Permian, these two regions were separated by a narrow sea-way, but it is not clear why one geographically isolated group should evolve a sail, but the other group not. The family Sphenacodontidae is actually paraphyletic as originally described, defined by shared primitive synapsid characters; these animals constitute an evolutionary gradation from primitive synapsid to early therapsid. The clade Sphenacodontia is used to designate the monophyletic group that includes sphenacodontids and all their descendants (including mammals), while Sphenacodontidae in the strict sense includes only specialised pelycosaurs, and not earlier more primitive members of the family like Haptodus, Palaeohatteria, Pantelosaurus, and Cutleria (in pre-cladistic classifications all included under the genus Haptodus). The clade Sphenacodontoidea is used by Laurin and Reisz 1997 to designate the most recent common ancestor of Sphenacodontidae and Therapsida and all their descendants, and is defined by certain features of the skull. Sphenacodontid fossils are so far known only from North America and Europe.

Haptodus was a small sphenacodont, a clade that includes therapsids and hence, mammals. It was at least 1.5 metres (5 ft) in length. It lived from Latest Carboniferous to Early Permian, in the equatorial Pangea. It was a medium-sized predator, feeding on insects and small vertebrates. It is one of the basalmost sphenacodontian. Haptodus (like Haptodontinae) appears to be paraphyleticand located on the stem that gave rise to sphenacodontids, such as Dimetrodon, as well as therapsids. Unlike Dimetrodon, it lacked the "sail". Some authors have synonymized Palaeohatteria, Pantelosaurus, and Cutleria with Haptodus, but this does not appear to be warranted.

Ctenorhachis (Greek for "comb spine") is an extinct genus of the family Sphenacodontidae. Ctenorhachis was related to Dimetrodon, but did not belong to the same subfamily as Dimetrodon and Sphenacodon, being a more basal member of Sphenacodontidae. Ctenorhachis lived in the Early Permian epoch. Two specimens are known that have been found from the Wichita Group outcropping in Baylor and Archer counties, north-central Texas. Only the vertebrae and pelvis are known. Articulated vertebrae from the holotype specimen possess blade like neural spines that are greatly enlarged, although not nearly to the extent that can be seen in more derived sphenacodontds such as Dimetrodon and Secodontosaurus, in which they form a large sail. The pelvis is nearly identical to that of Dimetrodon. As suggested in the original description of the genus, Ctenorhachis may represent a short-spined sexual dimorph, although the authors find this unlikely.

Cryptovenator (Crypto, from Greek kryptos -hidden, secret-; venator, from Latin -hunter-) is an extinct genus of sphenacodontid pelycosaur which existed in Germany during the latest Carboniferous (late Gzhelian age, 300 Ma ± 2.4 Ma). It is known from the holotype LFN−PW 2008/5599−LS, an anterior right mandible fragment, recovered from a dark, fine grained sandstone of the middle Remigiusberg Formation. It was first named by Jörg Fröbisch, Rainer R. Schoch, Johannes Müller, Thomas Schindler and Dieter Schweiss in 2011 and the type species is Cryptovenator hirschbergeri.

Ctenospondylus, ("comb vertebra") was a pelycosaur that was about 3 meters (10 feet) long. It lived from Latest Carboniferous to Early Permian. Its fossils were found in the U.S. states of Ohio and Texas. It was a carnivore and preyed upon animals close to its size. Ctenospondylus had a long tail, short back spines, and a very deep yet narrow skull with massive jaws that had sharp teeth. Because of its large size, it was probably the apex predator in its environment, and might have competed with other predators like Dimetrodon for food.A species has been found in Ohio, along with Dimetrodon, Edaphosaurus, Ophiacodon, and Eryops, according to the latest Fossils of Ohio book.

Ctenospondylus casei.
Add a photo to this gallery 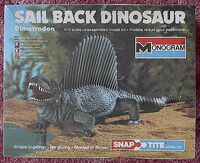 Dimetrodon erroneously regarded as a dinosaur. 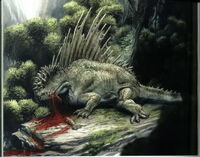 Malevolusaurus perditor, a sphenacodontid from Peter Jackson's book, The World of Kong: A Natural History of Skull Island.

Torchy, the Dimetrodon from Land Of The Lost TV Series.

Naosaurus painting by Charles R. Knight, which was based on a composite of Dimetrodon and Edaphosaurus.

Dimetrodon from Journey To The Center Of The Earth 1959 Movie. 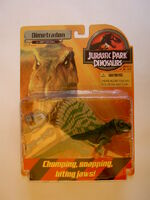 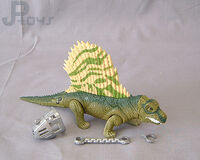 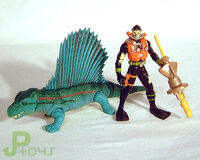