Skorpiovenator is a large carnivorous dinosaur, known as one of the abelisaurids. It was described by Canale, Scanferla, Agnolin and Novas in 2009. It is known from only one nearly complete specimen, missing only most of the forelimbs and parts of the tail.

Skorpiovenator was a 6 meter (20 feet) long abelisaurid that inhabited the Huincul Formation of Argentina, contemporary of the carcharodontosaurid Mapusaurus, another abelisaurid named Ilokelesia, and a giant sauropod named Argentinosaurus. This dinosaur was named not by its diet, but by its specimen being surrounded by a bustling colony of scorpions. Like some its relatives, such as Carnotaurus, Skorpiovenator had a short, deep robust skull which was typical for an abelisaurid, along with very short arms which could not be useful when fighting. 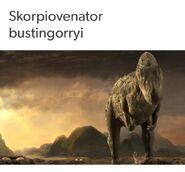 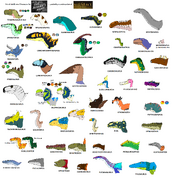 Add a photo to this gallery
Retrieved from "https://dinopedia.fandom.com/wiki/Skorpiovenator?oldid=123168"
Community content is available under CC-BY-SA unless otherwise noted.