Sivatherium (meaning "Shiva's beast") was a genus of giraffid that ranged throughout Africa to the Indian Subcontinent. The species Sivatherium giganteum is the largest giraffid known, and also possibly the largest ruminant of all time. The Afro-Asiatic species, Sivatherium maurusium, was once placed within the genus "Libytherium."

Sivatherium giganteum remains have been recovered from the Himalayan foothills, dating around 1,000,000 BCE. S. maurusium may have become extinct as recently as 8,000 years ago, as depictions that greatly resemble it are known from ancient rock paintings in the Sahara desert, and in Central West India.

Sivatherium resembled the modern okapi, but was far larger, and more heavily built, being about 2.2 m (7.2 ft) tall at the shoulder, 3 m (9.8 ft) in total height with a weight up to 400–500 kg (880–1,100 lb). A newer estimate has come up with an estimated body mass of about 1,250 kg (2,760 lb). This would make Sivatherium the largest ruminant in history. This weight estimate is thought to be an underestimate, as it does not take into account the large horns possessed by males of the species. Sivatherium had a wide, antler-like pair of ossicones on its head, and a second pair of ossicones above its eyes. Its shoulders were very powerful to support the neck muscles required to lift the heavy skull. 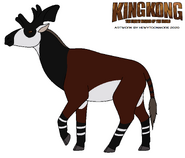 Add a photo to this gallery
Retrieved from "https://dinopedia.fandom.com/wiki/Sivatherium?oldid=124902"
Community content is available under CC-BY-SA unless otherwise noted.