Sinraptor is a genus of theropod dinosaur from the Late Jurassic. The name Sinraptor comes from the Latin suffix. "Sino", meaning "Chinese", and "Raptor" meaning "Thief". The specific name dongi honours Dong Zhiming. Despite its name, Sinraptor is not related to dromaeosaurids (often nicknamed "raptors") like Velociraptor. It probably even hunted the largest dinosaur to walk on Asia; Mamenchisaurus.

The holotype specimen of Sinraptor was uncovered from the Shishugou Formation during a joint Chinese/Canadian expedition to the northwestern Chinese desert in 1987, and described by Philip J. Currie and Xian Zhao in 1994. Standing nearly 3 meters tall (10 ft) and measuring roughly 7.6 meters (25 ft) in length, two species of Sinraptor have been named. S. dongi, the type species, was described by Currie and Zhao in 1994. 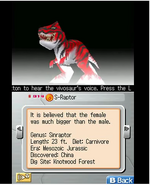 Add a photo to this gallery
Retrieved from "https://dinopedia.fandom.com/wiki/Sinraptor?oldid=190257"
Community content is available under CC-BY-SA unless otherwise noted.