Simbakubwa kutokaafrika ("great lion from Africa") is an extinct species of mammal of the family Hyainailouridae in the order Hyaenodonta. It lived during the early Miocene and was found in Kenya. The type specimen was recovered from deposits dated to be 23 million years old. Possibly reaching up to 1,500 kg (3,300 lbs), it might have surpassed the modern polar bear in size at its biggest.

Simbakubwa, like other hyainailourids, probably was a specialist hunter and scavenger that preyed on creatures such as Rhinoceros and early proboscideans. It may have been somewhat less specialized in crushing bone than its later relatives such as Hyainailouros. However, like Hyainailouros, Simbakubwa possessed lingually rotating carnassial blades, ensuring a constant shearing edge throughout its life.

The fossils of Simbakubwa were first discovered by Matthew Borths and Nancy Stevens when they were examining fossils stored at the Nairobi National Museum in Kenya. The type specimen consists of a mandible from the lower jaw, a right upper maxilla and some post cranial remains. The light wear patterns on the dentition indicate that the holotype specimen was a young adult at the time of its death. The study of the postcranial remains indicates Simbakubwa was possessed of a semi-digitigrade walking stance. 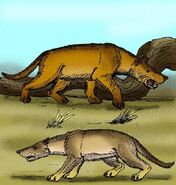 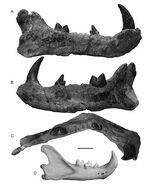 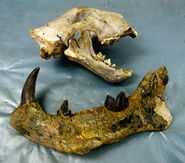 Add a photo to this gallery
Retrieved from "https://dinopedia.fandom.com/wiki/Simbakubwa?oldid=148787"
Community content is available under CC-BY-SA unless otherwise noted.