The Silurian is a major division of the geologic timescale that extends from the end of the Ordovician period, about 443.7 ± 1.5 million years ago, to the beginning of the Devonian period, about 416.0 ± 2.8 Ma (ICS 2004). As with other geologic periods, the beds that define the period's start and end are well identified, but the exact dates are uncertain by 5-10 million years. The base of the Silurian is set at a major extinction event when 60% of marine species were wiped out. See Ordovician-Silurian extinction events.

The Silurian system was first identified by Sir Roderick Murchison, who was examining fossil-bearing sedimentary rock strata in south Wales in the early 1830s. He named the sequences for a Celtic tribe of Wales, the Silures, extending the convention his friend Adam Sedgwick had established for the Cambrian. In 1835 the two men presented a joint paper, under the title On the Silurian and Cambrian Systems, Exhibiting the Order in which the Older Sedimentary Strata Succeed each other in England and Wales, which was the germ of the modern geological time scale. As it was first identified, the "Silurian" series when traced farther afield quickly came to overlap Sedgwick's "Cambrian" sequence, however, provoking furious disagreements that ended the friendship. Charles Lapworth eventually resolved the conflict by defining a new Ordovician system including the contended beds.

The Silurian Period of time is usually broken into early (Llandovery and Wenlock) and late (Ludlow and Pridoli) subdivisions (epochs). Nevertheless, some schemes use an early (Llandovery), middle (Wenlock) and late (Ludlow and Pridoli) breakdown. These faunal stages are characterized by their index fossils, new species of colonial marine Graptolites that appeared in each. Epochs of time correspond to series of rocks (as periods of time correspond to systems of rocks), which are referred to as belonging to the lower, middle, or upper part of the rock column, analogous to early, middle, or late Silurian time. The epochs and stages from youngest to oldest are:

In North America a different suite of regional stages is used:

During the Silurian, Gondwana continued a slow southward drift to high southern latitudes, but there is evidence that the Silurian icecaps were less extensive than those of the late Ordovician glaciation. The melting of icecaps and glaciers contributed to a rise in sea level, recognizable from the fact that Silurian sediments overlie eroded Ordovician sediments, forming an unconformity. Other cratons and continent fragments drifted together near the equator, starting the formation of a second Supercontinent known as Euramerica.

When the proto-Europe collided with North America, the collision folded coastal sediments that had been accumulating since the Cambrian off the east coast of North America and the west coast of Europe. This event is the Caledonian orogeny, a spate of mountain building that stretched from New York State through conjoined Europe and Greenland to Norway. At the end of the Silurian, sea levels dropped again, leaving telltale basins of evaporites in a basin extending from Michigan to West Virginia, and the new mountain ranges were rapidly eroded. The Teays River, flowing into the shallow mid-continental sea, eroded Ordovician strata, leaving traces in the Silurian strata of northern Ohio and Indiana.

The vast ocean of Panthalassa covered most of the northern hemisphere. Other minor oceans include, Proto-Tethys, Paleo-Tethys, Rheic Ocean, a seaway of Iapetus Ocean (now in between Avalonia and Laurentia), and newly formed Ural Ocean.

During this period, the Earth entered a long warm greenhouse phase, and warm shallow seas covered much of the equatorial land masses. The period witnessed a relative stabilization of the Earth's general climate, ending the previous pattern of erratic climatic fluctuations. Layers of broken shells (called coquina) provide strong evidence of a climate dominated by violent storms generated then as now by warm sea surfaces.

Coral reefs made their first appearance during this time, built by extinct tabulate and rugose corals. The first bony fish, the Osteichthyes appeared, represented by the Acanthodians covered with bony scales; fishes reached considerable diversity and developed movable jaws, adapted from the supports of the front two or three gill arches. A diverse fauna of Eurypterus (Sea Scorpions) -- some of them several meters in length—prowled the shallow Silurian seas of North America; many of their fossils have been found in New York State. Brachiopods, bryozoa, molluscs, and trilobites were abundant and diverse.

The first fossil records of vascular plants, that is, land plants with tissues that carry food, appeared in the Silurian period. The earliest known representatives of this group are the Cooksonia (mostly from the northern hemisphere) and Baragwanathia (from Australia). A primitive Silurian land plant with xylem and phloem but no differentiation in root, stem or leaf, was much-branched Psylophyton, reproducing by spores and breathing through stomata on every surface, and probably photosynthesizing in every tissue exposed to light. Rhyniophyta and primitive lycopods were other land plants that first appear during this period.

The first land fungi probably appeared by this time. 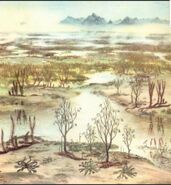 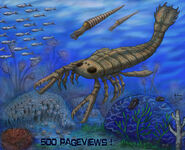 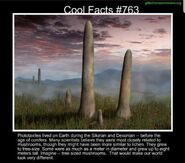 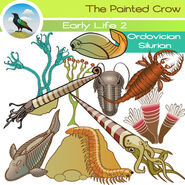 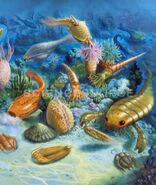