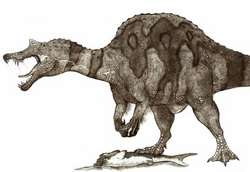 Sigilmassasaurus (see-jil-MAH-sah-SAWR-us); (“Sijilmassa lizard”) is a genus of spinosaurid dinosaur from Northern Africa, living in the Early Cretaceous. It is thought to have looked a bit like Spinosaurus, which lived in the same place and time. Not much is known about the animal, although it was likely fairly large.

Fossils of this dinosaur were found in the Tafilalt Oasis region of Morocco, near the site of the ancient city of Sijilmassa, for which it was named. Canadian paleontologist Dale Russell named Sigilmassasaurus in 1996, from the ancient city and the Greek word sauros (“lizard”). A single species was named, S. brevicollis, which is derived from the Latin brevis (“short”) and collum (“neck”), because the neck vertebrae are very short from front to back. Russell also described another specimen as a possible second species of Sigilmassasaurus, although he chose not to name it due to its incomplete nature.

Sigilmassasaurus comes from sediments in northwest africa, southern Morocco, which are called by various names, including the Gres rouges infracenomaniens, Continental Red Beds, and lower Kem Kem Beds. These rocks date back to the Cenomanian, the earliest faunal stage within the Late Cretaceous Period, or about 100 to 94 million years ago (Sereno et al., 1996).

The holotype, or original specimen, of S. brevicollis is a single neck vertebra, although Russell referred about fifteen other vertebra found in the same formation to the species. Other material was found in Egypt, and is known as “Spinosaurus B” (Stromer, 1934). Russell considered this Egyptian specimen to belong to Sigilmassasaurus or a closely related animal, and created the family Sigilmassasauridae for these animals (Russell, 1996). The neck vertebrae of these dinosaurs are wider from side to side than they are long from front to back. The exact position of Sigilmassasaurus within the theropod family tree is unknown, but it belongs somewhere inside the theropod subgroup known as Tetanurae.

Albeit recent research reassigned the Sigilmassasuarus remains onto the Spinosaurus Morcoccanus subspecies, the disputed validity of this Species continues.

Several large theropods (more than one tonne) are known from the Cenomanian of northern Africa, raising questions about how such animals would have coexisted. Species of Spinosaurus, the largest known theropod, has been found in both morocco and egypt, as has the huge Carcharodontosaurus. Two smaller theropods, Deltadromeus and Bahariasaurus, have also been found in Morocco and Egypt, respectively, and may be closely related or possibly the same genus. Sigilmassasaurus, from Morocco, and “Spinosaurus B”, from Egypt, represent a fourth type of large predator. This situation resembles that in the Late Jurassic Morrison Formation of North America, which boasts up to five theropod genera over one tonne in weight, as well as several smaller genera (Henderson, 1998; Holtz et al., 2004). Differences in head shape and body size among the large North African theropods may have been enough to allow niche partitioning as seen among the many different predator species found today in the African savanna (Farlow & Pianka, 2002).

Retrieved from "https://dinopedia.fandom.com/wiki/Sigilmassasaurus?oldid=136355"
Community content is available under CC-BY-SA unless otherwise noted.