Arctodus Simus, also known as the short-faced bear, was a very large species of bear living in the Americas during the Pleistocene. The short faced bear (Arctodus spp.) is the genus that inhabited North America during the Pleistocene epoch from about 1.8 Mya until 11,000 years ago. It was the most common early North American bear and was most abundant in western north america, especially California. There are two recognized species: Arctodus pristinus and Arctodus simus, with the latter considered to be one of the largest known terrestrial mammalian carnivores that has ever existed. It has been hypothesized that their extinction coincides with the Younger Dryas period of global cooling commencing around 10,900 BC.

The name short-faced bear derives from the shape of their skulls, which appear to have a disproportionately short snout compared to other bears. This characteristic is also shared by its extant relative the spectacled bear. However, this apparent shortness is an illusion caused by their deep snouts and short nasal regions.[2] The scientific name of the genus, Arctodus, derives from the Greek languageand means "bear tooth".

The short-faced bear belongs to a group of bears known as the Tremarctinae, which appeared in North America during the earliest parts of the late Miocene epoch in the form of Plionarctos, a genus considered ancestral to Arctodus. During the Great American Interchange that followed the joining of North and South America, tremarctines invaded South America, leading to the evolution of Arctotherium and the modern spectacled bear (Tremarctos ornatus). Although the early history of Arctodus is poorly known, it evidently became widespread in North America by the Kansan age about 800,000 years ago.

Arctodus simus first appeared during the middle Pleistocene in North America, about 800,000 years ago, ranging from Alaska to Mississippi, and the species became extinct about 11,600 years ago. Its fossils were first found in the Potter Creek Cave, Shasta County, California. It might have been the largest carnivorous land mammal that ever lived in North America ! A giant short-faced bear skeleton has been found in Indiana, unearthed south of Rochester. Showing how abudant the species were. It has become well known in scientific circles because it was the most nearly complete skeleton of a giant short-faced bear found in America. The original bones are in the Field Museum, Chicago.

Arctodus pristinus inhabited more southerly areas, ranging from northern Texas to New Jersey in the east, Aguascalientes, Mexico to the southwest, and with large concentrations in Florida, the oldest from the Santa Fe River 1 site of Gilchrist County, Florida paleontological sites.

Researchers disagree on the diet of Arctodus. Analysis of bones from Alaska showed high concentrations of nitrogen-15, a stable nitrogen isotope accumulated by meat-eaters, with no evidence of ingestion of vegetation. Based on this evidence, A. simus was suggested to have been highly carnivorous and as an adult would have required 16 kg (35.3 lb) of flesh per day to survive. Others point out that the species would have had a varied diet across its range, and that the short-faced bear's skull shares many features with herbivorous bears and likely did include some plant matter in its diet.

One proposal for its predatory habits envisages A. simus as a brutish predator that overwhelmed the large mammals of the Pleistocene with its great physical strength. However, some suggest that despite being very large, its limbs were too gracile for such an attack strategy.

Because its long legs enabled it to run at speeds of 50–70 km/h (30–40 mph), an alternative hypothesis is that it may have hunted by running down Pleistocene herbivores, such as wild horsesand saiga antelopes, in a cheetah-like fashion, at one time earning it the name "running bear". However, during pursuit of speedy game animals, the bear's sheer physical mass would be a handicap. Arctodus skeletons do not articulate in a way that would have allowed for quick turns – an ability required of any predator that survives by chasing down agile prey. A 2010 study found the "long-legged" features of the bear are an 'illusion' created by the animal's relatively short back.

Arctodus moved in a pacing motion like a camel, horse, and modern bears, making it built more for endurance than for great speed. A. simus, according to these arguments, was ill-equipped to be an active predator, leading some to conclude that it was a kleptoparasite, using its enormous size to intimidate smaller predators, such as dire wolves, saber-tooth cats, and American lions, or chase them from their kills and steal their food. This idea was challenged in a 2013 study of the micro-wear of the teeth of various extant and extinct bears. The researchers concluded that the short-faced bear was not a pure scavenger and in fact was even less of a scavenger than the modern polar bear. A 2010 study concluded that the species was neither a super-predator nor pure scavenger but an opportunistic omnivore like modern brown bears; also similiar to prehistoric Theropods. Recently, Some authors also suggest that the giant short-faced bear and the cave bear were omnivores, like most modern bears, and the former may have eaten plants depending on availability. 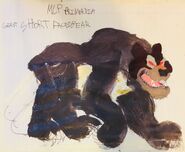 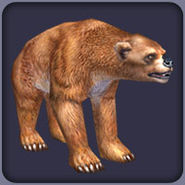 Add a photo to this gallery
Retrieved from "https://dinopedia.fandom.com/wiki/Short-faced_Bear?oldid=144441"
Community content is available under CC-BY-SA unless otherwise noted.