Dinopedia
Register
Don't have an account?
Sign In
Advertisement
in: Reptiles, Anapsid Reptiles, Walking with Monsters Creatures,
and 22 more

Scutosaurus (meaning “shielded reptile”) is an armor-covered pareiasaur reptile, perhaps as much as 2.5–3 m long and weighed a ton, which lived around 252-248 MYA in Russia, in the late Permian period.

Scutosaurs mainly travelled in herds, not related to dinosaurs but instead were very distant ancestors of turtles.

Although they had no shell, their backs were covered in hard, bony plates. Despite their size and armor, they were prey for Gorgonopsids. Once they tired from running from danger, they’re vulnerable. Like the massive sauropod dinosaurs, scutosaurs couldn't chew, but instead they probably had stones they pick up in their stomachs to help grind the vegetation so their digestive juices could get to work. Scutosaurs could smell water from several miles away. Its genus name refers to large plates of armor scattered across its body, making it one of the best-defended animals. It was a large reptile that, unlike most reptiles (but like the dinosaurs), held its legs underneath its body to support its great weight. 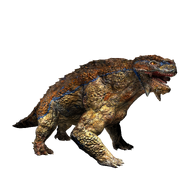 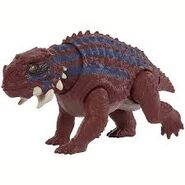