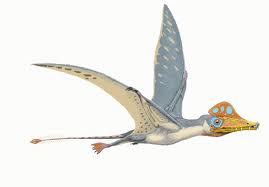 Scaphognathus was a pterosaur that lived around Germany during the Late Jurassic. It had a wingspan of 0.9 meter (3 feet). It had a rosette of needle sharp teeth.

At present Scaphognathus is known from three specimens, all of which originated in the Kimmeridgian-age[1] Solnhofen Limestone.[2] Physically it was very similar to Rhamphorhynchus, albeit with notable cranial differences.[2]

For one, Scaphognathus had a proportionately shorter skull (4.5 inches) with a blunter tip and a larger antorbital fenestra.[2] Its teeth oriented vertically rather than horizontally. The traditional count of them held that eighteen teeth were in the upper jaws and ten in the lower.[2] S. Christopher Bennett, studying a new third specimen, SMNS 59395, in 2004 determined there were only sixteen teeth in the upper jaws, the higher previous number having been caused by incorrectly adding replacement teeth.[3]

Comparisons between the scleral rings of Scaphognathus and modern birds and reptiles suggest that it may have been diurnal. This may also indicate niche partitioning with contemporary pterosaurs inferred to be nocturnal, such as Ctenochasma and Rhamphorhynchus.[4]

The first known Scaphognathus specimen was described in 1831 by August Goldfuss[5] who mistook the tailless specimen for a new Pterodactylus species: P. crassirostris.[2] The specific name means "fat snout" in Latin. This specimen was an incomplete adult with a 0.9 meter (3 feet) wingspan recovered from the Solnhofen strata near Eichstätt. In 1858 Johann Wagner referred the species to Rhamphorhynchus. After recognising the fundamentally different snout shape, Wagner, after previous failed attempts by Leopold Fitzinger and Christoph Gottfried Andreas Giebel, who used preoccupied names, in 1861 named a distinct genus: Scaphognathus, derived from Greek skaphe, "boat" or "tub", and gnathos, "jaw", in reference to the blunt shape of the lower jaws.[6]

In the early twentieth century, the "rhamphorhynchoid" nature of S. crassirostris was recognized after the discovery of the second specimen in Mühlheim, whose long tail was preserved. The second Scaphognathus specimen was more complete than its predecessor, but only half the size (twenty inch wingspan) and with partially ossified bones.[2] These characters indicate that the second specimen was a juvenile.[2]


Cite error: <ref> tags exist, but no <references/> tag was found
Retrieved from "https://dinopedia.fandom.com/wiki/Scaphognathus?oldid=138324"
Community content is available under CC-BY-SA unless otherwise noted.