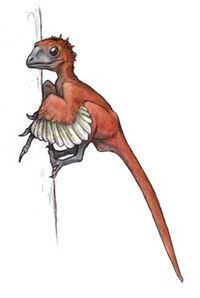 Scansoriopteryx (meaning "climbing wing") is a genus of avialan dinosaur. Described from only a single juvenile fossil specimen found in Liaoning, China, Scansoriopteryx is a sparrow-sized animal that shows adaptations in the foot indicating an arboreal (tree-dwelling) lifestyle. It possessed an unusual, elongated third finger which may have supported a membranous wing. The type specimen of Scansoriopteryx also contains the fossilized impression of feathers.

The type specimen of Scansoriopteryx heilmanni (specimen number CAGS02-IG-gausa-1/DM 607) represents thefossilized remains of a hatchlingmaniraptoran dinosaur, similar in some ways to Archaeopteryx. A second specimen, the holotype of Epidendrosaurus ninchengensis (IVPPV12653), also shows features indicating it was a juvenile. The specimen is partially disarticulated, and most bones are preserved as impressions in the rock slab, rather than three-dimensional structures. Because the only known specimens are juvenile, the size of a full-grown Scansoriopteryx is unknown–the type specimen is a tiny, sparrow-sized creature.

Scansoriopteryx is also notable for its wide, rounded jaws. The lower jaw contained at least twelve teeth, larger in the front of the jaws than in the back. The lower jaw bones may have been fused together, a feature otherwise known only in the oviraptorosaurs.

Scansoriopteryx had a non-perforated hip socket, which is more open in most, but not all, other dinosaurs. It also had a pubis (hip bone) which pointed forward, a primitive trait among theropods, and unlike some maniraptorans more closely related to birds, where the pubis points downward or backward. The legs were short, and preserve small pebbly scales along the upper foot (metatarsus), as well as possible impressions of long feathers in the same area, possibly similar to the "hind wings" of Microraptor and other basal paravians. It also had an unusually large first toe, or hallux, which was low on the foot and may have been reversed, allowing some grasping ability.

The tail was long, six or seven times the length of the femur, and ended in a fan of feathers.

Add a photo to this gallery
Retrieved from "https://dinopedia.fandom.com/wiki/Scansoriopteryx?oldid=172793"
Community content is available under CC-BY-SA unless otherwise noted.