The Santana Formation is a rock formation in Brazil in the Araripe Basin.  It was discovered by Johann Baptist von Spix.  The formation is full of fossils from the early Cenomanian epoch of the early Cretaceous.  It is known for fish, piscivorous dinosaurs, crocodiles, and turtles.  Unfortunately, very large amounts of Green Sulphur Bacteria accumulated in the lake and caused mass-mortality in the population of fish.  Not only this, but also coastal erosion and nutrient leaching caused the death of turtles and crocodiles.  So many Pterosaurs have been found here because they probably ingested the sulphide-rich water and died.

A turtle found here was Santanachelys.

A crocodile found here was Araripesuchus. 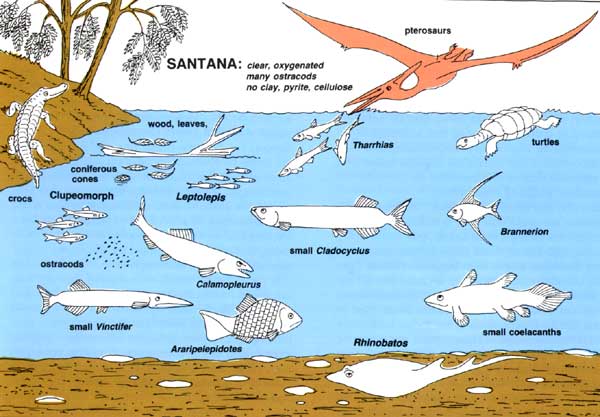 Retrieved from "https://dinopedia.fandom.com/wiki/Santana_Formation?oldid=64104"
Community content is available under CC-BY-SA unless otherwise noted.