Saltopus ("jumpy leg") was long only 60 cm and had about 1 kilo. It was small but also very fast. It probably ate insects. It lived in late Triassic Scotland. 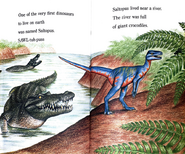 Add a photo to this gallery
Retrieved from "https://dinopedia.fandom.com/wiki/Saltopus?oldid=141255"
Community content is available under CC-BY-SA unless otherwise noted.