Pristichampsus (name meaning: "saw crocodile") is an extinct genus of pristichampsid crocodylian from Eurasia and possibly North America. Because the type species, P. rollianti, was based on insufficient material, the taxonomic status of the genus is in doubt, and other species have been referred to other genera, primarily Boverisuchus.

Pristichampsus was first described and named as a species of Crocodilus, C. rollianti, by Gray in 1831 on the basis of remains from the Lutetian of France. Gervais (1853) assigned this species to its own genus, creating the new combination Pristichampsus rollianti. Other species have been referred to this genus. The genera Boverisuchus and Weigeltisuchus from the Lutetian of Germany as well as Limnosaurus from North America were synonymized with Pristichampsus and their type species were reassigned to it. Langston (1975) found Limnosaurus to be based on non-diagnostic remains, and therefore considered it to be in its own genus, as a nomen dubium. He also reassigned Crocodylus vorax from the Lutetian of Wyoming and West Texas to Pristichampsus. Efimov (1988) named two additional species of Pristichampsus, P. birjukovi and P. kuznetzovi from the Middle Eocene of Eastern Kazakhstan. Following a revision of the genus Pristichampsus by Brochu (2013), P. rollinati was found to be based on insufficiently diagnostic material and therefore is a nomen dubium. Boverisuchus was reinstated as a valid genus, and the species Weigeltisuchus geiseltalensis was considered to be synonymous with B. magnifrons. Brochu (2013) also reassigned P. vorax as the second species of Boverisuchus. According to Brochu (2013), material from the middle Eocene of Italy and Texas may represent other species of Boverisuchus.

Based on other pristichampsids, Pristichampsus is assumed to have had heavily armoured skin, and long limbs suggesting a cursorial (i.e. running/chasing) habits. It also had hoof-like toes, suggesting that it lived more on land than in the water, and that it therefore probably hunted terrestrial mammals. Pristichampsus's teeth were ziphodont; laterally compressed, sharp, and with serrated edges (characteristic of terrestrial crocodilians that are unable to dispatch their prey by drowning them). Due to their similarity to those of certain theropod dinosaurs they were initially mistaken for theropod teeth, leading paleontologists to believe that some non-avian dinosaurs survived the Cretaceous–Paleogene extinction event.

The species P. rollinatii shows further features adapting the animal to this lifestyle. The tail was more reminiscent of a dinosaur's, being round in cross-section and lacking the osteoderm crest observed in extant crocodile species. It would also have been capable of galloping and facultative bipedalism. However, this would only have been possible at high speeds as the centre of gravity moves in front of the pelvis.

With it's hoof like claws and toes, long legs which would have been used for galloping and running the environments that the Pristichampsus lived in would be areas where it could easily run at fast speeds. 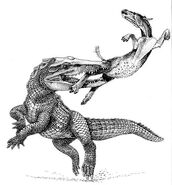 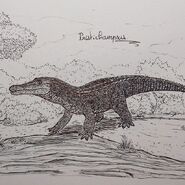 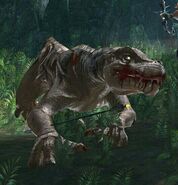