Phiomia is an extinct genus of basal proboscid that lived in what is now Northern Africa during the Late Eocene to Early Oligocene some 36-35 million years ago. "Phiomia serridens" means "saw-toothed annimal of Fayum ".

Phiomia was around 2.5 metres (8.2 ft) high, and vaguely resembled a modern elephant, although, based on the shape of its nasal bones, it had only a very short trunk. It had short tusks on the upper jaw and also short shovel-like tusks on the lower jaw that were most likely used for gathering food. These were similar to those of the Miocene Platybelodon,Archaeobelodon, and Amebelodon, but considerably smaller. The tusks in the upper jaw may have been used in defence, or scraping bark off trees.

About 40 million years ago, the line that led to modern elephants began with a group of prehistoric mammals native to northern Africa—medium-sized, semi-aquatic herbivores sporting rudimentary tusks and trunks. Phiomia is interesting because it seems to have been more elephant-like than its close contemporary Moeritherium, a pig-sized creature with some hippopotamus-like features that nevertheless still counted as a prehistoric elephant. Whereas Moeritherium lived in swamps, Phiomia thrived on a diet of terrestrial vegetation, and probably evidenced the beginnings of a distinctly elephant-like trunk. 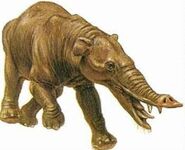 Add a photo to this gallery
Retrieved from "https://dinopedia.fandom.com/wiki/Phiomia?oldid=128078"
Community content is available under CC-BY-SA unless otherwise noted.