The Pareiasaurs (Pareiasauridae) are a clade of medium-sized to large herbivorous anapsid (turtles ancestors) reptiles that flourished during the Permian period. Their build was quite stocky, often with rather short tails and small heads. These ungainly-looking animals had very large bodies, ranging from 60 to 300 centimetres (2.0 to 9.8 ft) long, and weights of 600 kilograms (1,300 lb) would not have been unusual. They also had strong limbs, broad feet, and short tails. They were protected with bony scutes (osteoderms) set in the skin, as a defense against predators. Their heavy skulls were ornamented with multiple knobs and ridges. The leaf-shaped multi-cusped teeth resemble those of iguanas, caseids, and other reptilian herbivores. This dentition, together with the deep capacious body, which could have housed an extensive digestive tract, indicate that these fearsome-looking animals were herbivores. Michael Lee has argued that pareiasaurs include the direct ancestors of modern turtles. They had turtle-like skull features, and in several genera the scutes had developed into bony plates, possibly the precursors of a turtle shell. Jalil and Janvier, in a large analysis of pareiasaur relationships, also found turtles to be close relatives of the "dwarf" pareiasaurs, such as Pumiliopareia. However, the exact relationships of turtles remains controversial, and critics have argued that pareiasaur scutes are not homologous with the turtle shell.

Bradysaurus was a large (2.5 to 3 meters long [8 to 10 ft]), early and common pareiasaur, the fossils of which are known from the richly fossiliferous Tapinocephalus Assemblage Zone (Capitanian age) of the South African Karoo. Along with the similarly large dinocephalia, the bradysaurs constituted the herbivorous megafauna of the late Middle Permian Period. In life they were probably slow, clumsy and inoffensive animals, that had evolved a covering of armoured scutes to protect them against their predators, the gorgonopsians.

The skull was large (about 42 to 48 centimeters long [17 to 19 in]), broad and rounded at the front. It was coarsely sculptured and knobby, with the sutures between the bones not clearly visible. The marginal teeth were high-crowned, with only a few cusps, which is a primitive characteristic.The feet were short and broad, the phalangeal count being 2,3,3,3,2 on the fore-foot and 2,3,3,4,3 on the hind. The whole body is protected by dermal scutes, although these are not as thick or heavy as in more advanced forms.

Bradysaurus is the only member of the subfamily Bradysaurinae. It is the most primitive known pareiasaur and can be considered a good ancestral type from which the others developed. Its large dimensions show that, even very early in their evolutionary history, these strange animals had already attained an optimal size. Even later, more advanced forms, like Scutosaurus, were no larger. The advantage of large size was to provide defense against predators and to maintain a stable body temperature (gigantothermy).

Kuhn 1969 lists no fewer than nine species for this genus, but this is certainly an excessive number. Boonstra 1969 distinguishes only four species on the basis of tooth structure, two of which Kuhn places in the genus Embrithosaurus.The genera Brachypareia, Bradysuchus, Koalemasaurus, and Platyoropha would seem to be synonyms of Bradysaurus.The two species are as follows:

B. baini's skull.
Add a photo to this gallery

The skull of this pareiasaur is unknown. It is known from a number of isolated vertebrae, jaws, and limb-bones and an incomplete skeleton, all from a single locality. Shihtienfenia is unusual because of the presence of 6, rather than the usual 4, sacral vertebrae, and may belong in a separate subfamily, although Oskar Kuhn includes it under the Pareiasaurines in his monograph. As with the Pareiasaurines the upper margin of the ilium is flat. No dicynodonts are found in association, so these animals obviously lived in a separate environment. Shihtienfenia Permica was classified as a pareiasaur by M. S. Y. Lee in 1997. Shihtienfenia Permica may belong under a different subfamily in Pareiasauridae, but Oskar Kuhn put it under Pareiasaurinae in his monograph. Shihtienfenia, and the members of Pareiasaurinae have flat upper margins of the ilium.

Anthodon and Nanopareia are two extinct genus of permian anapsid pareiasaurs, they belong to an unranked taxon named Pumiliopareiasauria. Those reptiles was the turtle's direct ancestors.

Elginia was a genus of Late Permian pareisaurs, which normally grew up to 3 metres (9.8 ft).It was a dwarf genus of pareiasaur, only about 60 centimetres (2 ft) long, with fossils found at Elgin in Scotland. Its head was covered in spikes, with the longest pair growing out of the back of the skull. These spikes were probably used for display rather than physical combat. 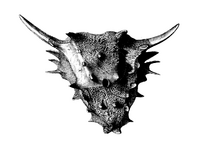 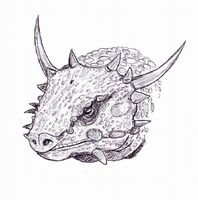 E. gordoni.
Add a photo to this gallery

P. nasicornis's skull.
Add a photo to this gallery

Pareiasaurus is an extinct genus of permian anapsid reptiles. It was a typical member of its family, the pareiasaurs, which take their name from this genus.They are large quadruped, about 2.5 metres (8.2 ft) long, with elephantine legs, walking in a typically reptilian posture. Its skull had several spine- and wart-like protrusions. Pareiasaurus's leaf-shaped teeth, ideal for biting through tough plant fibers, indicate it was a herbivore. Even the palate had teeth. Their species include: Pareiasaurus serridens, P. baini, P. bombidens, P. russouwi.

P. baini.
Add a photo to this gallery

thumb|300px|right|Scutosaurus in Walking With Monsters Series. (From 1:30 to end). Scutosaurus (Shield Lizard) was a genus of armor-covered pareiasaur that lived around 252-248 million years ago in Russia, in the later Permian period. Its genus name refers to large plates of armor scattered across its body. It was a large anapsid reptile that, unlike most reptiles, held its legs underneath its body to support its great weight. 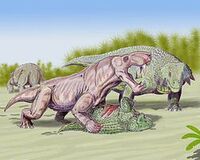 Scutosaurus in Walking With Monsters Series. 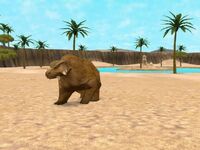 Scutosaurus in Zoo Tycoon 2 video-game.
Add a photo to this gallery

Their exact ancestry has been disputed. It was believed they are the only surviving branch of the ancient evolutionary grade Anapsida, which includes groups such as procolophonids, millerettids, protorothyrids, and pareiasaurs. All anapsid skulls lack a temporal opening, while all other extant amniotes have temporal openings (although in mammals the hole has become the zygomatic arch). The millerettids, protorothyrids, and pareiasaurs became extinct in the late Permian period, and the procolophonoids during the Triassic 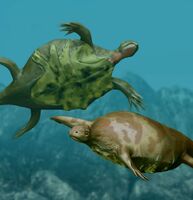 The Stinkpot or Musk Turtle, the smallest turtle in Canada.
Add a photo to this gallery
Retrieved from "https://dinopedia.fandom.com/wiki/Pareiasauridae?oldid=128081"
Community content is available under CC-BY-SA unless otherwise noted.