Paramylodon harlani is an extinct genus of ground sloth of the family Mylodontidae endemic to North America during the Pliocene through Pleistocene epochs, living from around ~4.9 Mya–11,000 years ago. It is also known as Harlan's ground sloth.

Paramylodon measured about 3 meters (9.8 feet) in length and weighed as much as 1,000–1,089 kg.[1] It is known from North America deposits, including in Mexico and the United States and as far south as Guatemala, and often mistaken as Glossotherium. Currently there is just one recognized species, P. harlani, (Owen) 1840, which is commonly referred to as Harlan's ground sloth in honor of American paleontologist Dr. Richard Harlan, who first discovered and described a lower jaw in 1835. Paramylodon exhibits the interesting characteristic of having had dermal ossicles, small bones embedded in the skin, presumably adding a degree of protection to the animal. This characteristic is also shared by the South American Mylodon.

The genus was created by Barnum Brown in 1903 with the species P. nebrascensis. The skull showed a number of characteristics similar to that of Mylodon harlani, which was also known from North America, but differed in the number of teeth present in the maxilla. Paramylodon had four teeth in the upper dentition, similar to that of Grypotherium darwini (=Mylodon darwini), but the then recognized genus of Mylodon possessed five upper teeth. P. nebrascensis was later considered to be a junior synonym of M. harlani by Stock (1925) given the large number of specimens from the La Brea Tar Pits that showed the presence of the upper caniniform to be variably lost in some specimens and retained in others. Thus the typical dental formula for the species of harlani is 5 / 4 {\displaystyle 5/4} 5/4. Work by Kraglievich (1928) sorted through the long-standing historical confusion concerning the taxonomic validity of Mylodon and Glossotherium, and determined what the type species of each genus was. An additional result was to recognize Paramylodon as generically different from Mylodon of South America and P. harlani was used as the species name as it had seniority over P. nebrascensis.

Until recently, Paramylodon was also viewed as a subspecies of Glossotherium and a number of institutions listed their specimens as Glossotherium harlani in part to work by Robertson (1976). Paramylodon is generically distinct from the South American genus of Glossotherium (see McAfee, 2007), although some questions remain regarding the relationship of the late Blancan specimens that have been tentatively assigned as "Glossotherium" chapadmalense due to their seeming similarity to the South American species of the same name.

Sites and specimen ages (not complete):

Recently a Paramylodon harlani specimen was identified from the Tarkio Valley site in Iowa association with Megalonyx jeffersoni. This is the first occurrence of Paramylodon in Iowa, and probably the first time these species have been found in close association.[3] These two species have since been uncovered at the Fairmead Landfill Site and Irvington Site in California.

On December 3, 2009, the Press-Enterprise newspaper reported a specimen skull to have been recovered in San Timoteo Canyon.

The habits that Paramylodons lived in were grasslands with feilds, plains, meadows, woods, forests, rivers, streams, brooks and creeks. Paramylodon picked a habitat live that had lots of grass and a water source like a lake. The grasslands that Paramylodon made their home was also home to many other mammals, reptiles like, snakes, turtles, tortoises, lizards, birds, fish, amphibians like frogs, toads, salamanders and invertebrates like, arachnids, arthropods, insects. 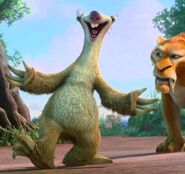 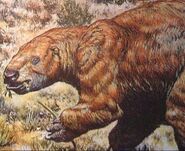 Retrieved from "https://dinopedia.fandom.com/wiki/Paramylodon?oldid=138205"
Community content is available under CC-BY-SA unless otherwise noted.