Pangaea was a supercontinent that existed from the Paleozoic era to the Triassic Period which spread from pole to pole and it was surrounded by the by the continents of today but they were all together or either in an island mass. Europe and Kazakhastan were part of Siberia. Pangaea crossed over the Equator and over the continent beneath it, Gondwana. Then, Arabia and India were attached to Pangaea and Turkey, Iran and Tibet were islands on the Paleo-Tethys Sea or the Tethys Ocean. Antartica was connected to Australia in which now it is seperated between the Indian Ocean.

Pangaea was pretty much the only land in the world (although there may have been a few tiny islands) untill right before the dinosaurs started evolving. 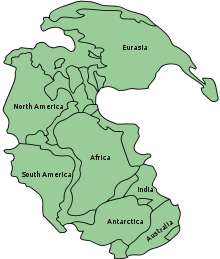 Retrieved from "https://dinopedia.fandom.com/wiki/Pangaea?oldid=29315"
Community content is available under CC-BY-SA unless otherwise noted.