Start a Wiki
The Paleocene epoch was a time of dense forests and evolutionary experiments. The extinction of the dinosaurs and other giant reptiles at the end of the Cretaceous paved the way for mammals and birds to evolve to fill those empty niches, so many new creatures appeared. During the Paleocene the island continent of India moved north and collided with Asia. At the end of the epoch, an abrupt rise in temperature across the planet made the climate much wetter and caused a sea level rise. The Palaeocene epoch began at the Cretaceous-Tertiary Mass Extinction 66 million years ago and ended 54.8 million years ago.

K–T boundary that marks the separation between Cretaceous and Paleocene is visible in the geological record of much of the Earth by a discontinuity in the fossil fauna, with high iridium levels. There is also fossil evidence of abrupt changes in flora and fauna. There is some evidence that a substantial but very short-lived climatic change may have happened in the very early decades of the Paleocene. There are several theories about the cause of the K-T extinction event, with most evidence supporting the impact of a 10 km diameter asteroid forming the buried Chicxulub crater on the coast of Yucatan, Mexico.

The end of the Paleocene (55.5/54.8 Ma) was marked by one of the most significant periods of global change during the Cenozoic. The Paleocene-Eocene Thermal Maximum upset oceanic and atmospheric circulation and led to the extinction of numerous deep-sea benthic foraminifera and a major turnover in mammals on land.

The Paleocene is divided into three stages, from youngest to oldest:

Additionally, the Paleocene is divided into six Mammal Paleogene zones.

The early Paleocene was cooler and dryer than the preceding Cretaceous, though temperatures rose sharply during the Palaeocene-Eocene Thermal Maximum. The climate became warm and humid worldwide towards the Eocene boundary, with subtropical vegetation growing in Greenland and Patagonia, crocodiles swimming off the coast of Greenland, and early primates evolving in tropical palm forests of northern Wyoming. The Earth's poles were cool and temperate; North America, Europe, Australia and southern South America were warm and temperate; equatorial areas had tropical climates; and north and south of the equatorial areas, climates were hot and arid.

In many ways, the Paleocene continued processes that had begun during the late Cretaceous Period. During the Paleocene, the continents continued to drift toward their present positions. Supercontinent Laurasia had not yet separated into three continents - Europe and Greenland were still connected, North America and Asia were still intermittently joined by a land bridge, while Greenland and North America were beginning to separate. The Laramide orogeny of the late Cretaceous continued to uplift the Rocky Mountains in the American west, which ended in the succeeding epoch.

South and North America remained separated by equatorial seas (they joined during the Neogene); the components of the former southern supercontinent Gondwanaland continued to split apart, with Africa, South America, Antarctica and Australia pulling away from each other. Africa was heading north towards Europe, slowly closing the Tethys Ocean, and India began its migration to Asia that would lead to a tectonic collision and the formation of the Himalayas.

The inland seas in North America (Western Interior Seaway) and Europe had receded by the beginning of the Paleocene, making way for new land-based flora and fauna. 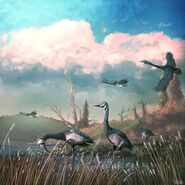 Add a photo to this gallery
Retrieved from "https://dinopedia.fandom.com/wiki/Palaeocene?oldid=133144"
Community content is available under CC-BY-SA unless otherwise noted.