Orthacanthus is a genus of prehistoric freshwater shark that lived during the Paleozoic era. It was also an member of a group of ancient sharks called xenacanths, all of which were freshwater sharks with long fins down their backs and a spine at the start of the fin. It was the largest of the known xenacanths at 3 meters (10 feet) and 45 kg (100 lbs).

About 260 million years ago, Orthacanthus was the apex predator of freshwater swamps and bayous in Europe and North America. It owned a peculiar set of double-fanged teeth. They first appeared about 400 million years ago in the Devonian, and became extinct just before the Mesozoic period, about 225 million years ago.

Base Form in Jurassic World: The Game 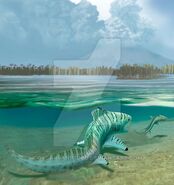