The Orinoco crocodile (Crocodylus intermedius) is a large species of critically endangered crocodile. Its population is very small and it can only be found in freshwater environments in Colombia and Venezuela, in particular the Orinoco River and its tributaries. Extensively hunted for their skins in the 19th and 20th centuries, this species is one of the most critically endangered species of crocodiles. It is a very large species, in fact the largest species of crocodilian and predator in the Americas. Males have been reported up to 6.6 meters (22 feet) in the past, but such sizes do not exist today, 5.2 meters (17 feet) being a more widely accepted maximum size. Males average at 4.1 m (13 ft) in length weighing 380 kg (840 lb), while females are slightly smaller averaging 225 kg (496 lb). Sexual dimorphism is not as profound as in some other species. The coloration is light even in adults.

The biology of the Orinoco crocodile is poorly documented in the wild, mostly due its small population. It is thought to have a piscivorous diet with a highly opportunistic nature resulting in a generalist predatory behavior. The Orinoco crocodile is an apex predator and will take the opportunity to prey on a variety of reptiles, birds, and mammals, including caimans on occasion. The prey base is mostly made up of large predatory fish, challenging the general view by the locals complaining about the crocodile hunting local fish to very low numbers. Despite its large size, the Orinoco crocodile rarely poses a threat to humans, despite several reports. Reproduction takes place in the dry season when the water level is lower. Orinoco crocodiles are hole nesters, digging holes in the sand to lay their eggs. The females guard the nests and young up to several years.

The Orinoco crocodile can be recognised by its relatively long snout, which is narrower than that of the somewhat similar-looking American crocodile. This species generally has a pale tan hide, though at least three coloration variations are known, with some almost completely yellowish and some a dark brownish-gray. The skin can change colour over long periods of time; this phenomenon has been recorded in other species that can gradually change the amount of melanin in their skin. These crocodiles have dark-brown markings, which present as more pronounced bands in younger specimens and as scattered markings on mature ones.

The Orinoco crocodile ranks among the largest living reptiles, as well as the largest predator in the Americas. Typically, males are 3.6 to 4.8 meters (12 to 16 feet) in length, weighing 380 to 635 kg (838 to 1,400 lb), while females are typically 3.0 to 3.3 meters (9.8 to 10.8 feet) in length, weighing 225 to 317 kg (496 to 699 lbs). The largest specimen reported was shot in 1800, and allegedly measured at 6.6 meters (22 feet), although the source is considered reliable, unfortunately, no voucher specimen is known from this. Due to extensive hunting for their skins in the 20th century, such giants do not exist today, and modern Orinoco crocodiles have not been reported to exceed 5.1 m (17 ft) in length. Merchán listed the maximum total length attainable for a male as 5.2 meters (17 feet) and the maximum length of a female as 3.6 meters (12 feet). According to Guinness Records, the average length of adults that they were able to examine was only 3 meters (9.8 feet) and the largest specimen found firsthand was 4.2 meters (14 feet). It is arguably the largest crocodilian in the Americas, while American crocodiles and black caimans approach similar dimensions, on average the Orinoco crocodile is slightly longer. 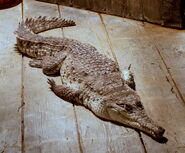 From The Photo Ark. 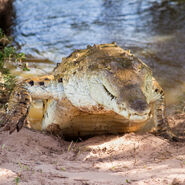 Add a photo to this gallery
Retrieved from "https://dinopedia.fandom.com/wiki/Orinoco_Crocodile?oldid=141927"
Community content is available under CC-BY-SA unless otherwise noted.