Olorotitan was a genus of lambeosaurine, or duckbilled dinosaurs, from the middle or late Maastrichtian-age Late Cretaceous Tsagayan Formation beds located in Kundur, Amur Region, Far Eastern Russia. The remains, consisting of a nearly complete skeleton, were described by Pascal Godefroit et al. in mid-2003. The generic name means “gigantic swan” while the specific descriptor refers to the location of the fossil find at Arhara County. Olorotitan is distinct from other crested duckbills by its possession of an unusual crest that points backward and takes on a hatchet or fan-like shape. Its discovery has implications for the diversity of lambeosaurine hadrosaurids.

Olorotitan is based on the most complete lambeosaurine skeleton found outside North America to date. It was a large hadrosaurid, comparable to other large lambeosaurines like Parasaurolophus cyrtocristatus, and may have grown up to 12 meters long (39 ft). It is characterized by numerous unique features for a hadrosaurid, the most obvious being the large hatchet-like hollow crest adorning its skull. The skull itself is supported by a rather elongated neck, having 18 vertebrae, exceeding the previous hadrosaurid maximum of 15. The sacrum, with 15 or 16 vertebrae, has at least 3 more vertebrae than other hadrosaurids. Further along the vertebral series, in the proximal third of the tail, there are articulations between the tips of the neural spines, making that caudal area particularly rigid; the regularity of these connections suggests that they are not due to a pathology, although more specimens are needed to be certain. Godefroit and his coauthors found through a phylogenetic analysis that it was closest to Corythosaurus and Hypacrosaurus.

Olorotitan can be found in Jurassic World: Evolution via the Secrets of Dr. Wu DLC. 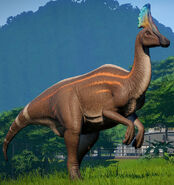 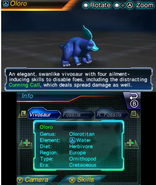 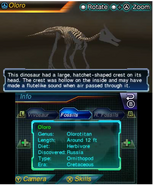 Add a photo to this gallery
Retrieved from "https://dinopedia.fandom.com/wiki/Olorotitan?oldid=202558"
Community content is available under CC-BY-SA unless otherwise noted.