Start a Wiki
Nundasuchus is an extinct genus of archosaur, possibly suchian, known from the Middle Triassic Manda beds of southwestern Tanzania. It contains a single species, Nundasuchus songeaensis, known from a single partially complete skeleton and skull.

Nundasuchus lived in what is now Tanzania, Africa around 240 million years ago and was a carnivore and apex predator, feeding on prey such as early reptiles and synapsids. Incapable of particularly fast movement, it was most likely an ambush predator targeting weak or juvenile animals in a group at close range. It was around 2.7/3 meters (9 feet) long and has been described as having steak knife-like teeth and bony plates on its back.[2] Its legs were situated underneath its body. According to Jurassic World: The Game, it has a light plate of armour on its back. This trait is more reminiscent of later theropod dinosaurs than it is of Nundasuchus's crocodilian and reptilian cousins, suggesting a connection between crocodilian reptiles and more developed theropod dinosaurs from the later Triassic, Jurassic, and Cretaceous periods. 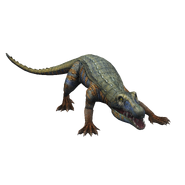 Add a photo to this gallery
Retrieved from "https://dinopedia.fandom.com/wiki/Nundasuchus?oldid=138529"
Community content is available under CC-BY-SA unless otherwise noted.