Nisusia is a genus of brachiopod known from the Middle Cambrian Burgess Shale. 133 specimens of Nisusia are known from the Greater Phyllopod bed, where they comprise 0.25% of the community.[1] They are the first Burgess Shale animal that are discovered by Walcott.

In one of the brachiopods in filter feeders was a Nisusia in the Burgess Shale Rom's Virtual Sea Odyssey. It also appeared in Cambrian Seas by Phelesch Bubble. 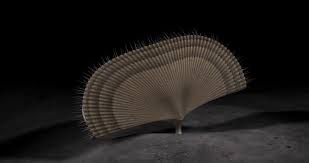 Retrieved from "https://dinopedia.fandom.com/wiki/Nisusia?oldid=58973"
Community content is available under CC-BY-SA unless otherwise noted.