Meiolania ("small roamer") is an extinct genus of cryptodire turtle from the Oligocene to Holocene, with the last relict populations at New Caledonia which survived until 2,000 years ago. The animal was rather large, measuring 2.5 metres (8.2 feet) in length, making it the second-largest known nonmarine turtle or tortoise, surpassed only by Colossochelys atlas from Asia, which lived in the Pleistocene. It lived in Australia and New Caledonia. Remains have also been found on the island of Efate in Vanatu, associated with settlements from the Lapita culture. Meiolani turtles fed on plants. Its surviving relatives are the cryptodire turtles of South America. The Meiolania specimens which were once living on New Caledonia and Lord Howe Island were much smaller than their giant relatives from the Australian continent. When the first fossil remains (a vertebra) were found, they were originally thought to be from a large Monitor Lizard, similar to, but smaller than Megalania, so the genus was named accordingly. Later, when more remains were found, it was realized that the "small roamer" was actually a turtle, and not a lizard. 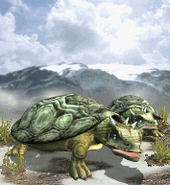 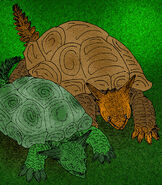 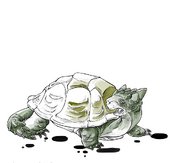 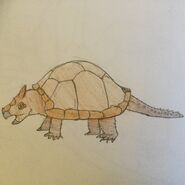 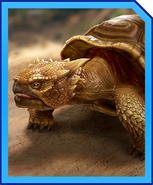