Megatherium (meaning "Great Beast") was a genus of rhino-sized ground sloths endemic to North America that lived from the Pleistocene existing for approximately 5.3 million years. Its size was exceeded by only a few other land mammals, including mammals like the Indricotherium and some elephants.

The rhinoceros-sized Promegatherium is suggested to be the ancestor of Megatherium.

Weighing almost a much as an elephant, Megatherium must have been one of the most impressive animals ever to walk the Earth. It was a massive ground sloth, covered in long dark hair. It had huge claws, and could walk on its hind legs up to eight tons, about as much as a bull African Elephant. Although it was primarily a quadruped, its footprints show that it was capable of assuming a bipedal stance. When it stood on its hind legs it was about twenty feet (6 m) tall, twice the height of an elephant. This sloth, like a modern anteater, walked on the sides of its feet because its claws prevented it from putting them flat on the ground. Megatherium species were members of the abundant Pleistocene Megafauna, large mammals that lived during the Pleistocene epoch.

Megatherium had a robust skeleton with a large pelvic girdle and a broad muscular tail. Its large size enabled it to feed at heights unreachable by other contemporary herbivores. Rising on its powerful hind legs and using its tail to form a tripod, Megatherium could support its massive body weight while using the curved claws on its long forelegs to pull down branches with the choicest leaves. Its jaw is believed to have housed a long tongue, which it would then use to pull leaves into its mouth, similar to the modern tree sloth.

Megatherium is thought to have been a herbivore, although there have been suggestions that its long claws and very strong forelimbs may have allowed it to scavenge meat, or even kill animals such as glyptodons. Fossilised footprints show that it often walked on its hind legs, although there is much debate as to what it looked like when it did. Megatherium inhabited woodland and grassland environments of the lightly wooded areas of South America.

A few thousand years ago the Americas were the land of giant ground sloths. They were a bit more impressive than their tree-dwelling cousins, but would probably have been equally odd-looking. Megatherium was a huge sloth, almost 6 metres long, and because it became extinct so recently, mummified skin and dung has been discovered in dry caves in North America helping to reconstruct exactly what it looked like and how it behaved. The biggest surprise has come from the fossilised trackways of Megatherium. These have revealed the amazing fact that these giants regularly walked upright on their hind legs. The giant sloths must have weighed almost four tonnes (nearly as much as an African elephant), and so walking on only two legs would have put a tremendous strain on their skeletons.

The Giant Ground Sloths were a group of several different species of sloths, characterized by a large shapes and sizes. They originated in the Oligocene about 35 million years ago and lived on the American continents, reaching a weight of several tons and a height of about 4 metres (13 feet). Some species of giant ground sloths became extinct only in the late Pleistocene. Unlike modern sloths, they didn't live in the trees, and they lived only on the ground. They were clumsy, slow-moving animals with a low narrow skull and a very small amount of brain matter. The torso ended in an unusually long thick tail. The hind legs were much stronger than the front. When walking, the animal walked not on the whole foot, but only at the edges. Megatherium have developed only molars, which were very long and had a tetrahedral shape. In spite of its great weight, the animal grew on its hind legs and forelegs leaning on a tree trunk, lacking succulent leaves. The leaves were not only food for these animals. They also eat grasses, and perhaps did not disdain carrion.

People have occupied the American continent during the period from 30 to 10 thousand years ago, and the last giant sloths disappeared on the mainland about 10,000 years ago. This leads to the assumption that these animals were hunted. They were probably easy prey because, like their modern relatives moved very slowly.

As it perhaps appeared on Dinosaurs (TV series). 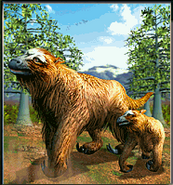 Retrieved from "https://dinopedia.fandom.com/wiki/Megatherium?oldid=144380"
Community content is available under CC-BY-SA unless otherwise noted.