Megapiranha paranensis is an extinct serrasalmid characin fish from the Late Miocene (8–10 million years ago) of Argentina described in 2009. It is thought to have been up to a meter in length. The holotype consists only of premaxillae and a zigzag tooth row; the rest of its body is unknown. This dentition is reminiscent of both the double-row seen in pacus, and the single row seen in the teeth of modern piranhas, suggesting that M. paranensis is a transitional form. It was a bigger relative of the Piranha. 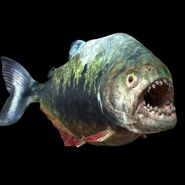 Add a photo to this gallery
Retrieved from "https://dinopedia.fandom.com/wiki/Megapiranha?oldid=138148"
Community content is available under CC-BY-SA unless otherwise noted.