Megalonyx (meaning "large claw"), also known as the Jefferson's ground sloth, was a genus of ground sloths of the family Megalonychidae endemic to North America from the Hemphillian of the Late Miocene through to the Rancholabrean of the Pleistocene, living from ~10.3 million years ago — 11,000 years ago, existing for approximately 10.289 million years. Type species, Megalonyx jeffersonii, measured about 3 m (9.8 ft) and weighed up to 1,000 kilograms. 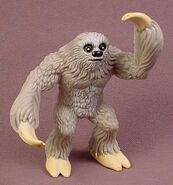 Add a photo to this gallery
Retrieved from "https://dinopedia.fandom.com/wiki/Megalonyx?oldid=153191"
Community content is available under CC-BY-SA unless otherwise noted.