Megalochelys atlas, formerly known as Colossochelys atlas, Geochelone atlas, or Testudo atlas and initially described in 1837 (later withdrawn) as Megalochelys sivalensis, is an extinct species of cryptodire turtle from the Miocene through the Pleistocene periods. During the dry glacial periods it ranged from western India and Pakistan (possibly even as far west as southern and eastern Europe) to as far east as Sulawesi and Timor in Indonesia. It was the largest testudine known. 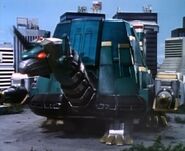 Add a photo to this gallery
Retrieved from "https://dinopedia.fandom.com/wiki/Megalochelys?oldid=135263"
Community content is available under CC-BY-SA unless otherwise noted.