Megalneusaurus was a genus of large carniverous marine reptile, belonging to the Pliosaur superfamily. Megalneusaurus lived during the Late Jurassic Period in the Sundance Sea, which covered parts of modern day North America. The genus and type species was based upon ribs, vertebrae, a fore-paddle and fragments of the pectoral girdle discovered in Wyoming, USA in 1895. The species named as Megalneusaurus rex (meaning "great swimming lizard King") in 1898. However some of this material has since been lost, although new material has been discovered from the same site. Based upon the bones very large size, it appears to have grown to a size comparable to Pliosaurus. It is likely the same species as The 'Monster of Aramberri" and its attacker. 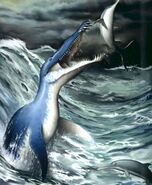 Add a photo to this gallery
Retrieved from "https://dinopedia.fandom.com/wiki/Megalneusaurus?oldid=124247"
Community content is available under CC-BY-SA unless otherwise noted.